Thailand has sharply reduced the rate of mother-to-child HIV/Aids transmission and claims to be among the world's most successful nations in this field of endeavour.

The country has been working with the United Nations, the World Health Organisation, and the the United Nations Children's Fund (Unicef) to certify the achievement, Public Health Minister Rajata Rajatanavin said.

"The effort to reduce HIV transmission from mother to child and cut the transmission rate further to under 2% is our next priority," he said. 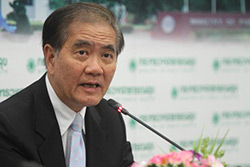 Successful measures included a campaign aimed at persuading pregnant women to seek care before 12 weeks of gestation, giving antiretroviral drugs to infected pregnant mothers as soon as possible, rapid blood tests and antiretroviral drugs for infants, and avoiding feeding infants with milk from infected mothers for at least 18 months.

Feeding infants with infected mothers' breast milk causes up to 14% of infections, he said.

"If the reduction rate is certified, it would make Thailand among the top countries in the world that have been able to end HIV transmission from mothers to children," Dr Rajata said.

Nimit Tienudom, director of the Aids Access Foundation, said the universal healthcare scheme was also a key factor contributing to the sharp rate reduction since 2005.

Mr Nimit said all women should be eligible for pregnancy care at their hospital of choice, which would help further cut the trasmission rate.

The earlier the disease is detected, the quicker the mothers will receive treatment, lessening the risk of transmission to babies.

Currently, pregnant women under the universal healthcare scheme are eligible for free pregnancy care at government hospitals, which tend to be overcrowded.

Pregnant women under the Social Security Scheme receive a 13,000 baht lump sum payment per pregnancy, which doesn't fully cover their costs. Some choose not to have early antenatal care to save money.