All Asean states 'ready' for AC launch this year

Chon Buri - All 10 members of the Association of Southeast Asian Nations (Asean) are ready for the Asean Community's (AC) launch at the end of this year but the bloc needs to boost cooperation to deal with upcoming challenges, Foreign Minister Tanasak Patimapragorn said yesterday. 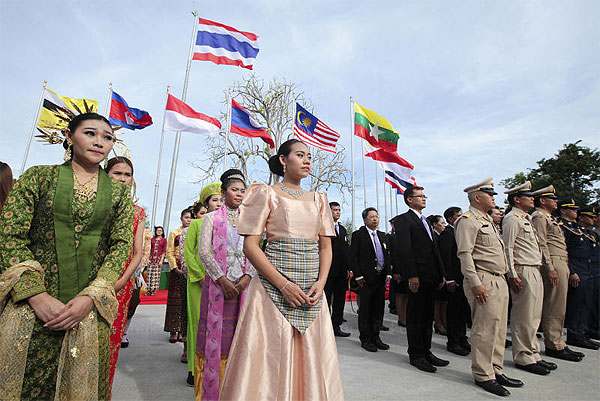 Speaking at a ceremony marking the 48th anniversary of Asean's founding, Gen Tanasak said the union should tighten up cooperation in all fields to make the community more inclusive, which is a key principle of the AC.

"Together, we can make Asean a dynamic and inclusive community where no one is left behind. Let's make Asean stronger and united," he said.

In moving forward as one community, Gen Tanasak said Asean should speed up narrowing the development gaps among member countries and enhance its connectivity through several projects, including transportation.

He also said border management and economic ties should be strengthened to bring all Asean members closer.

However, food security is among the challenges that the Asean community has to tackle, and Gen Tanasak saw the strengthening of agricultural sectors as the best way to handle the issue.

"After the AC transformation, Asean's voice will be heard loud and clear," Gen Tanasak said, adding that Thailand is also ready to join its Asean friends in moving towards the AC.

The ceremony to celebrate the 48th anniversary of the establishment of Asean was held at the Royal Thai Armed Forces' (RTAF) strategic studies centre in Chon Buri, the same place where Asean's five co-founders met for talks before the bloc's establishment on Aug 8, 1967.

The facility will be used as a study centre for Asean history and security for relevant officials. It is also used as the venue for international meetings, according to the RTAF.

Aside from Gen Tanasak, other high-level delegates including Asean Secretary-General Le Luong Minh, ambassadors and representatives from Asean and non-Asean members also attended the event.

Also yesterday, the first Asean cultural centre was officially opened in Bangkok and will be used as a venue to share cultural learning among Asean members.

Gen Tanasak, who also presided over the centre's opening, said the Asean cultural centre in the capital would benefit Asean citizens who want to study Asean culture.

This year marks a vital time for Asean as it moves towards the single community, he added.

"This cultural centre is aimed at strengthening ties among people by presenting different cultures with new technologies to enhance learning. I hope this centre will inspire our friends to build cultural centres in their own countries," he said.

MAIDSTONE, United Kingdom: The players who dominated Wimbledon over the past three decades may have changed, from Pete Sampras and Steffi Graf to Roger Federer and Serena Williams, but one feature has remained constant -- the supplier of its trademark strawberries.