A keen long-distance cyclist, HRH Crown Prince Maha Vajiralongkorn rallied the entire country Sunday behind a campaign to mark Her Majesty the Queen's birthday on Wednesday, recognised as Mother's Day in Thailand.

To mark the event, one of his bicycles with which His Royal Highness had ridden more than 5,000 kilometres was showcased at an exhibition to honour Her Majesty the Queen held at Sanam Suepa, near the Royal Plaza.

Another of the Crown Prince's passions is flying. As part of his military training, the Crown Prince has piloted the F-5 and F-16 fighter planes of the Royal Thai Air Force. He later took up training for commercial aircraft, and became a certified Boeing 737-400 pilot for the national airline, Thai Airways International, in 2004.

The Crown Prince has used his aviation skills in fund-raising events, having piloted special flights to raise money for charity.

Among these events was a special flight to Chiang Mai on Jan 5, 2007, when the Crown Prince piloted special Thai Airways International flight TG 8870 from Bangkok. A total of 112 passengers joined the flight including then prime minister Gen Surayudh Chulanonda. Tickets cost 1 million baht each, and a total of 80 million baht was raised for flood relief and medical equipment for hospitals in three southern provinces. Later that evening, the Crown Prince hosted a gala dinner at the Mandarin Oriental Dhara Dhevi where he presented commemorative pins. The following day, the Crown Prince piloted special flight TG 8871 back to Bangkok.

On Nov 13, 2010, the Crown Prince piloted a Buddhist pilgrimage flight to Gaya, India. The flight was organised by Thai Airways International to mark its 50th anniversary, with all participants attending a merit-making ceremony at Bodhgaya, the place where Lord Buddha attained enlightenment and is considered to be the spiritual centre for Buddhists worldwide.

A total of 100 tickets were sold at 500,000 baht each, with net proceeds of 50 million baht from the flight going towards HRH Crown Prince Maha Vajiralongkorn's Scholarship Foundation and to HRH Prince Dipangkorn Rasmijoti's Fund for Disaster Victims. This foundation was set up in 2009 to provide educational opportunities for outstanding but needy students. Two students from each province benefit from this scholarship each year.

The Crown Prince also piloted a special flight to Khon Kaen on Nov 12, 2012, to mark his auspicious 5th cycle birthday anniversary on July 28 that year. 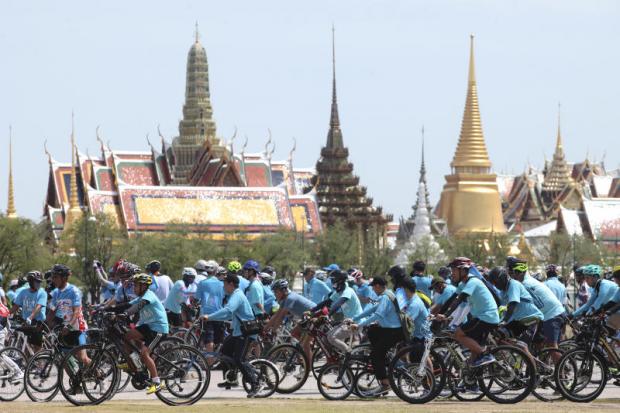 Cyclists set out for the mass biking event as they make their way past the Grand Palace. (Photo by Patipat Janthong) 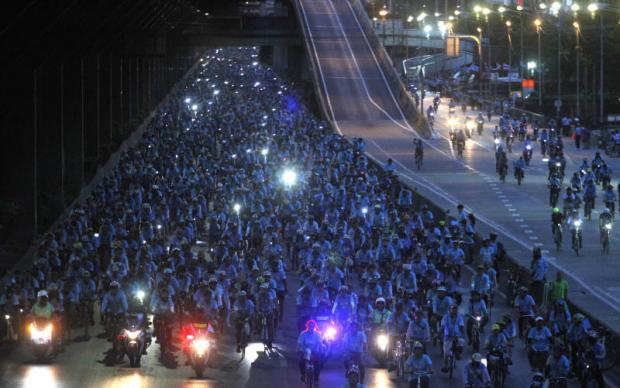 Vibhavadi Rangsit Road is filled with blue-clad cyclists on the return leg of the 43km route in the Bike for Mom event. (Photo by Thanarak Khunton) 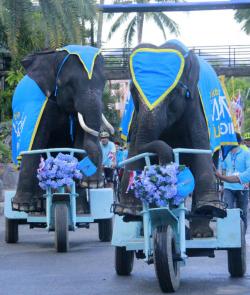 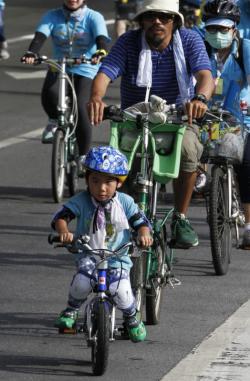 People of all ages ride their bicycles which come in all sizes. (Photo by Thanarak Khunton) 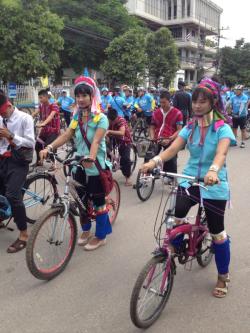 Ethnic Karen highlanders mount their bicycles as they prepare to hit the road in downtown Mae Hong Son. (Photo by Chewin Sattha)