Video caught the scene less than two seconds after the initial blast (see below) as the first bystanders rushed to help the injured at the Erawan Shrine. (Post Today photo)

Central Bangkok descended into chaos Monday evening when a bomb exploded at Ratchaprasong intersection, killing 20 people, including three foreigners, and injuring at least 125.

The explosion occurred about 7pm near the Brahmin statue at the Erawan Shrine on the intersection packed with evening rush-hour commuters and tourists, many of whom were visiting the shrine.

With a powerful flash caught on security video and a boom heard blocks away, the blast from the IED (improvised explosive device) scattered body parts across Rachaprasong intersection, spattered blood, blasted windows and burned motorbikes to the metal.

"Suddenly there was a big boom, and the whole room just shook, like someone dropped a wrecking ball on top of our ceiling," said Pim Niyomwan, an English instructor working on the eighth floor of the building right next to the shrine. "The whole building just shook. My four students were hysterical."

Police said the bomb was left on a bench beside the low fence of the shrine close to the intersection. Two objects suspected to be explosive devices were also discovered next to a nearby BTS station pillar near the shrine.

The national police chief, Pol Gen Somyot Pumpunmuang and others called it a vicious act meant to target helpless civilians but stopped short of labelling it "terrorism". No one or group had claimed responsibility by Tuesday morning.

At least three foreign nationals were among the dead, according to the national police chief. China's embassy in Bangkok said two Chinese nationals were killed, the Xinhua news agency reported.

On Tuesday morning, police revised the human toll from the bomb, citing some confusion at the scene, and deaths that occurred in hospitals among the badly wounded.

As of 8am Tuesday, the toll stood at 20 dead, including the two Chinese and one Filipino. Police said 125 were injured badly enough to need medical care, but did not provide a breakdown of Thai and foreign victims.

About seven of the bodies were collected from the shrine by Por Teck Tung rescue volunteers.

UN Secretary General Ban Ki Moon was "shocked" to learn about the deadly explosion. He hopes that "those responsible will be brought to justice," according to a statement from a UN spokesperson.

The US embassy in Bangkok issued an "emergency message" to Americans in Bangkok informing them of the blast.

"US Embassy personnel are liaising closely with local authorities to gather information," it said. "US citizens are advised to avoid the area and monitor local media for updates."

At least five motorcycles caught fire. Police denied the bomb had been planted in a motorcycle.

At 7.15pm, police closed the intersection to traffic to allow bomb disposal experts to get to the scene and rescue workers to move in. BTS trains to the area were immediately halted.

Police chief Somyot said the bomb at the shrine was improvised, with gunpowder stuffed inside a pipe, and detonated in a similar way to how a TNT device is set off.

"It was a barbaric act perpetrated during a busy time and the attack was meant to kill people," he said, adding the device was capable of causing destruction within a 40-metre radius.

Several bodies with visible burns were seen at the intersection, which was littered with human remains and debris from the blast. Rescue workers administered first aid to the injured, who sustained deep wounds and lacerations, and took them to the nearby Police General Hospital.

Some of the injured were also rushed to Ramathibodi, Rajavithi, Phramongkutklao, Chulalongkorn, Klang, Bangkok Christian and Phayathai 1 hospitals. 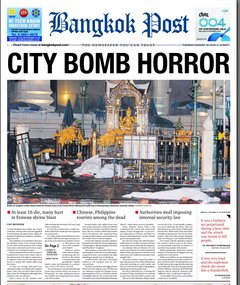 Tuesday's Bangkok Post was on the streets early to report on the shocking story.

The emergency room of the Police General Hospital, which sits across Ratchaprasong intersection, was swamped last night attending to people hurt in the blasts.

A staff member said about 20 people rushed to the hospital were in critical condition.

The blast was the third and biggest bomb attack since the military coup. The first was an explosion outside the Paragon shopping complex on Feb 1, in which one person was slightly injured. The second was at the Criminal Court on Ratchadaphisek Road on March 7, where there were no casualties.

He said Gen Prayut has ordered police, soldiers and city workers to inspect the blast scene and launch a thorough investigation.

According to Maj Gen Sansern, it is too early to speculate on the motive behind the blast but the government will take harsh action as it was a deliberate attempt to take people's lives.

The prime minister urged the public to stay calm and not rush to share information about the bombing on social media, said Maj Gen Weerachon Sukhondhapatipak, deputy government spokesman.

Security authorities are reviewing the situation before deciding if the internal security law will be invoked, a source said.

Gen Prawit said the explosion targeted the country's tourism sector as the attackers intentionally launched an attack in a crowded area popular with tourists.

Police and soldiers set up checkpoints and are patrolling areas which could be targets, Gen Prawit said. He insisted there was no indication at this stage that the bombing was politically motivated though Deputy Defence Minister and army chief Udomdej Sitabutr said an attack by elements with "different views" could not be ruled out.

"It is possible that another such incident could occur," he added.

A Google map of central Bangkok shows the exact point of the bomb blast.