These two men in red and white T-shirts were caught on CCTV near the prime suspect in yellow (left), and police want to have a word with them.

Police are looking for two more men they wish to contact in the investigation of the bombing outside the Erawan shrine on Monday.

Pol Lt Gen Prawut Thawornsiri, assistant national police chief, gave the media a screen capture from a grainy CCTV that shows the two men, who police say were standing close to the main suspect, the "man in the yellow T-shirt" strongly suspected of planting the bomb.

The low-quality image shows two males, dressed in red (C) and dressed in white (3rd R), standing in front of the wanted man in the yellow shirt, just as he is removing his backpack minutes before the bomb blast.

The two are described by police as persons of interest.

Police also expanded on their description of Thailand's most-wanted man, saying the suspected bomber was "Caucasian, Arab or mixed race", aged 20 to 30 and about 170cm (5-foot-7) tall. 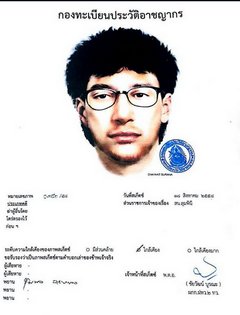 Prime suspect: The "man in the yellow T-shirt is at the centre of the bombing attack investigation.

Although Pol Lt Gen Prawut, who is also the police spokesman, raised the possibility that the man was Thai and in disguise, the warrant on charges of premeditated murder was issued for a "foreign man, name unknown, who appears in the sketch drawing."

A motorcycle taxi driver said in a phone interview aired by Channel 3, a Thai TV station, that he had picked up a man matching the police description at a taxi stand a quarter of a mile from the shrine after the bomb exploded, The New York Times reported early Thursday.

The driver, who gave his name as Kasem, said the man did not speak to him, just walked up and handed him a piece of paper with the words "Lumpini Park" written on it in English. Lumpini Park is a well-populated area in the commercial heart of Bangkok, about two-thirds of a mile from Erawan.

"He had a conversation on the phone," Kasem said. "I don't know what the language is. I don't know, but it is surely not Thai nor English language."

"I didn't see anyone at where I left him," he continued. "It was dark. There are some trees and it's hard to see."