Swedish national Marcus Westberg was typing on his laptop when Thai police came knocking. He soon became one of a handful of foreigners questioned because of their similar looks to the primary Bangkok bomb suspect. 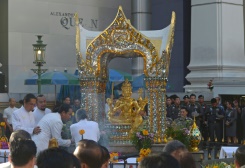 A religious ceremony takes place at the Brahma statue at the Erawan shrine on Friday.

Initially Westberg, who is visiting Thailand on holiday, thought the questioning on Tuesday afternoon in Bangkok was just part of a routine security check.

But then police asked him to account for his whereabouts on Monday evening, the same night a deadly bomb tore through a religious shrine in the centre of Bangkok killing 20 people and wounding more than 120 others.

"It was not until they asked to see my phone and started going through my photos that I considered that something might be wrong," he told AFP.

"They told me that I very much resembled their main suspect," he added.

Other foreigners have found themselves in a similar predicament since the deadly blast as police scramble to locate the suspect and any accomplices he may have had.

Most appear to have come under suspicion because they share a passing resemblance to a primary suspect, seen leaving a backpack under a bench at the Erawan shrine in Bangkok's bustling shopping district just moments before the bomb went off.

A sketch of the alleged bomber released by Thai police, based on CCTV and witness descriptions, shows a young man dressed in a yellow t-shirt with dark shaggy hair, a suggestion of stubble and thick-rimmed glasses.

The same day Westberg was being questioned, an Australian model and aspiring actor called Sunny Burns posted a selfie on Instagram from inside a Thai police station.

Talking with the police. I forgive everyone who spread those horrible rumours about me. I love this country and let's fight together. Let's find this bomber. I'm not a terrorist but I'm a ting tong actor :p

He said he had handed himself into police after amateur Internet sleuths started posting his details online as a potential bomb suspect.

"Talking with the police. I forgive everyone who spread those horrible rumours about me. I love this country and let's fight together. Let's find this bomber. I'm not a terrorist but I'm a ting tong actor," the caption on his Instagram photo read.

Multiple Thai news reporters also posted pictures on Wednesday evening of what they said was a dual French-Swiss national who was briefly detained on arrival at Don Mueang airport in Bangkok. He too had shaggy hair and thick glasses.

Westberg, who has a beard and neck-length hair, said his encounter with Thai police was "fairly relaxed" and that officers showed "politeness and professionalism" throughout the one-hour conversation.

"We agreed that the man in the CCTV footage had shorter hair and much less of a beard than I, and after joking with me that perhaps I should get a haircut before venturing outside again they thanked me for my time and cooperation and apologised for any inconvenience," he said.

"It really was not until the next day that I began to reflect on how very differently this could have played out," he added, particularly when he started asking himself why he specifically had come under the spotlight.

"I later found out that it had been entirely by chance: a police officer had seen me earlier on Tuesday, thought that I resembled the suspect and alerted his colleagues," he said.

"That was a relief to find out, I will admit."