An official holds seized elephant tusks to be displayed before its destruction in Bangkok Wednesday. (AP photo)

The government Wednesday destroyed nearly 2.2 tonnes of confiscated elephant ivory in a ceremony presided over by the prime minister.

In a ceremony presided over by Prime Minister Prayut Chan-o-cha, 2,155 kilograms of raw tusks and carved trinkets were fed into an industrial rock crusher before being incinerated. It marked the first time the kingdom has taken steps to destroy part of its stockpile.

The contraband was estimated to be worth about US$2.8 million, officials said.

"Elephants are our national symbol and are under threat from poaching and trade," Gen Prayut said. "This is to show the Thai government's strong determination to oppose ivory trafficking and that Thailand will comply with international rules."

He called for the country to "clean up its act" on the illegal wildlife trade, and promised heavy punishment for those who violate the law.

"I will no longer tolerate corruption and ignorance on this matter."

They have pushed for Bangkok to destroy its stockpile to signal its determination to stamp down on the trade and avoid the risk of seized ivory finding its way back onto the black market through corrupt officials.

John Scanlon, secretary-general of the Convention on International Trade in Endangered Species of Wild Fauna and Flora (Cities), praised the "clear progress" made by the government.

"It is now critical that this greatly enhanced effort is sustained," he said.

Cities had threatened in March to impose an international wildlife trade ban on Thailand if it failed to crack down on illegal ivory.

Trade in ivory was banned in 1989 under Cities, but that has not stopped criminal gangs seeking to exploit a continued demand for tusks in Asia. 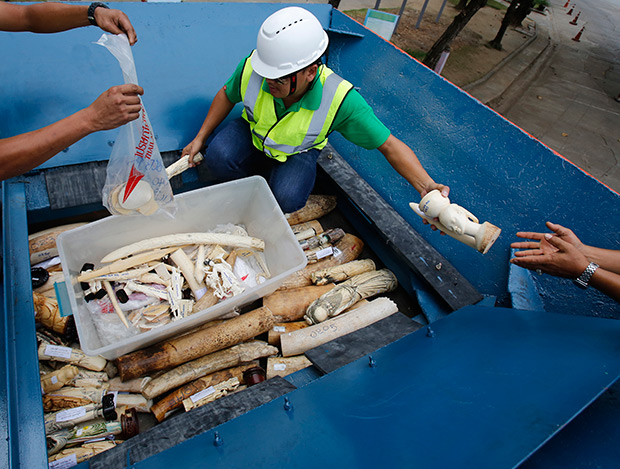 Ivory and other body parts of elephants are prized for decoration, as talismans, and for use in traditional medicine across parts of Asia with Thailand a key transit point.

Earlier this year, the government ordered the registration of any ivory people owned, warning that those who failed to do so would see their items confiscated.

They have also made a series of high-profile seizures including four tonnes of ivory found hidden in containers in April that originated in the Democratic Republic of Congo and was destined for Laos.

Police seized more than three tonnes of ivory a week later in a second haul, this time from Kenya that was again destined for Laos.

The ivory destroyed on Wednesday accounts for nearly all of Thailand's stockpile where criminal cases have been completed.

A further 540 kilogrammes has been donated to museums, government institution and universities to be used for educational and awareness raising purposes.

On Monday, environmental activists in Rayong said all of the tusks and other pieces should be preserved as national property.

The group also proposed that the ivory held as a state asset after the end of a court case. For example, it could be kept at the National Museum for learning purposes, the group said.