Three members of a Chinese family rescued and safe after a male elephant ran amok, gored his mahout to death and then tore off into the jungle with them still on his back, at Phutawan elephant camp (above) in Chiang Mai on Wednesday. (Photo by Cheewin Sattha)

A Chinese family were recovering from a terrifying ordeal after a male elephant ran amok, gored his mahout to death and then tore off into the jungle with them still on his back, in Chiang Mai on Wednesday.

The frightened tourists, Chinese parents travelling with their child, were rescued by another mahout who went into the forest to find them. They were reported to be shaken but unhurt.

Police called to the scene found the lifeless body of the Karen mahout, identified later as Surachai Daengphumpak, beside the Mae Wang stream near Phutawan elephant camp in tambon Mae Win of Mae Wang district.

The 40-year-old mahout had been gored in the neck and left side of his chest, police said.

The elephant, 30-year-old Plai Somjai, had fled into a jungle after killing the mahout with the three tourists still on his back.

Police said the tourists were part of a Chinese tour group that visited to camp to take elephant rides.

The father, mother and child were being taken for a ride in the stream when the elephant became frenzied, trying to throw the tourists from its back. The mahout, Surachai, tried to control him, but  the elephant attacked him, goring him to the ground with his tusks in a full view of tourists.

After the attack, the bull fled into the jungle, with the horrified Chinese family still on its back.

Authorities closed down the camp. Livestock officers and veterinarians were sent to search for the missing elephants and rescue the tourists.

The three Chinese tourists were rescued and were safe, but very upset after their ordeal.

The tourists were rescued after Phutawan elephant camp sent another mahout, known as ‘’Kwan Klui’’,  who used to take care of Plai Somjai, to calm the animal down.

The mahout went into the jungle riding a female elephant about noon and found Plai Somjai around one kilometre from Mae Wang stream.  It took him an hour to calm the agitated elephant, and finally ride him back to camp.

The rescued tourists were reported to be safe, but traumatised. 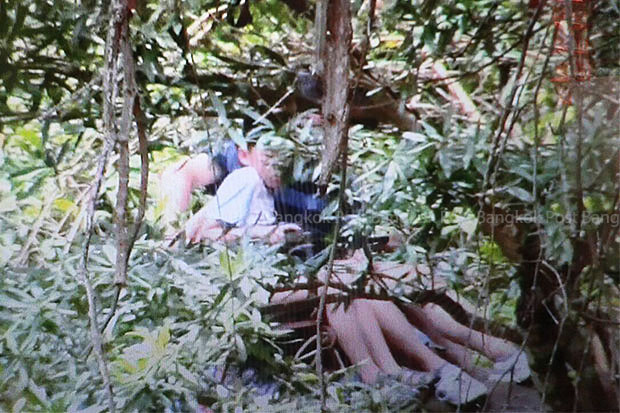 Three traumatised members of the Chinese family seen on the back of the bull elephant after it fled into the jungle in Chiang Mai provice. (Photo by Cheewin Sattha)