The Criminal Court has indicted former Tourism Authority of Thailand (TAT) governor Juthamas Siriwan and her daughter in a film festival bribery case, the Office of the Attorney-General spokesman said Wednesday.

Prosecutors indicted Mrs Juthamas, 68, and her daugther Jittisopha, 41, in the Criminal Court on Tuesday on charges of taking bribes, corruption and bid-rigging, plus breaching Section 6 of the law dealing with state employees’ offences and Section 12 of the law governing submitting tenders to state agencies, which carries a maximum jail term of 20 years. 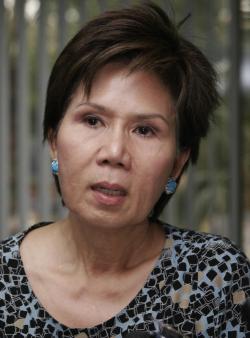 The court granted the pair bail of one million baht each and set Nov 9 for examination of evidence, OAG spoeksman Wanchai Rujanawong told a press conference.

The OAG early this month charged Mrs Juthamas and Ms Jittisopha for allegedly taking 60 million baht in kickbacks from a Los Angeles film-making couple in exchange for a contract to run the ill-fated Bangkok International Film Festival between 2002 and 2007.

A US court sentenced the American couple, Gerald and Patricia Green, to six months in jail and six months of home detention in 2010 for their part in paying bribes to secure the rights to run the festival.

Asked if US justice authorities had sought the extradition of the ex-TAT governor and her daughter, Mr Wanchai said the OAG had received a request but had already explained to them that the defendants were now being prosecuted under the Thai justice system. Their alleged offence was from the same incident in which the Greens had been convicted, so extradition was not needed.