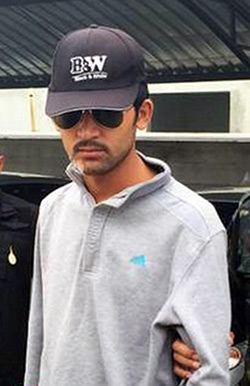 "The man found and arrested by the Burapha Task Force matches the suspect in the yellow t-shirt described in the arrest warrant" for the attack at the Ratchaprasong intersection that killed 20 people and injured 131 others, National Council for Peace and Order spokesman Winthai Suvaree said at a press conference.

Police, however, stopped short of definitively accusing the foreigner who arrived in Bangkok from Sa Kaeo province this afternoon of being the bomber.

Police spokesman Prawut Thavornsiri told the media he was an "important figure" and definitely part of the network behind the Aug 17 attack, as well as the failed bombing of the Sathorn pier the following day.

"Based on examination of the evidence, we can confirm the male suspect we arrested is an important one and is in the same group with other suspects behind the bombings at two locations," Pol Lt Gen Prawut said.

He added that the network to which the suspect belongs is suspected of not only bomb-making, but providing counterfeit passports to foreigners they smuggle through Thailand en route to third countries.

Pol Lt Gen Prawut said he was being held without charge under Section 44 of the interim constitution at the 11th Army Circle in Bangkok's Dusit district. He was being interrogated in English  and a DNA check and other forensics tests were scheduled to be performed in an attempt to link him to the deadly bombing. Police planned to bring in witnesses to try to place him at the Ratchaprasong intersection on the day of the bombing, he said.

"We need all witnesses to identify him" and to perform further tests related to existing evidence, such as fingerprints, DNA, and photos, Pol Lt Gen Prawut added.

Police planned to hold a more-extensive public briefing tomorrow to detail the results.

A ranking source in the police investigative team told the Bangkok Post that the suspect had been apprehended inside Cambodia Monday and brought today to the Cambodian border town of Poipet in Banteay Meanchey province, opposite Sa Kaeo's Aranyaprathet district, to be handed over for arrest by Thai authorities.

The source, declining to specify where in Cambodia he was captured, said the suspect had been on his way to Phnom Penh.

He underwent preliminary questioning at a military camp in Aranyaprathet before being flown by helicopter to Bangkok, arriving at 4.30pm.

At Tuesday's press conference, however, Pol Lt Gen Prawut denied Cambodia had become a haven for criminal suspect, saying he had been apprehended in Thailand at 11am today trying to sneak into Cambodia via a natural border.

Soldiers spotted the man while patrolling near the border in Aranyaprathet. He was walking alone through the brush in Ban Dong Ngu village of Pa Rai sub-district headed toward Cambodia.

While the spokesman refused to name the bombing suspect, the police investigative identified him as "Yusufu".

Thai media today widely published a photo of a Chinese passport for a man matching the suspect's description. On the passport, he is identified as Yusufu Mieraili, 25, from Xinjiang province.

Xinjiang is the home province for China's Uighur Muslim minority.

Pol Lt Gen Prawut told the media police did not have such a passport and had not seen the images posted on social media.

The police source said senior Thai investigators went to Cambodia to coordinate with authorities there after it had been confirmed the suspect fled over the border.