Uighurs under watch as CSD investigates ties to terrorism

Uighurs caught entering the country are taken to a holding centre in Songkhla (above) but many live freely in communities. (File photo courtesy of Radio Free Asia)

The Crime Suppression Division (CSD) is keeping a close watch on around 3,000 ethnic Uighurs in Thailand as authorities investigate possible links between Uighur extremists and the deadly Erawan shrine bombing.

Deputy national police chief Chakthip Chaijinda has ordered the CSD to follow the movements of Uighurs in Thailand, whether they have Chinese or Turkish passports, a CSD source close to the investigation said Wednesday.

The source said plainclothes police are keeping a vigil over Uighur residential areas.

The latest detained suspect, believed to be the prime suspect in the shrine bombing, was apprehended in Sa Kaeo province on Tuesday and is currently being interrogated at the 11th Military Circle in Bangkok.

The CSD source said deputy national police chief Pol Gen Chakthip wants to gather information on the Uighur communities, and look for evidence of illegal acts such as passport forgery and human trafficking.

He has "demanded reports as soon as possible" from his team, the source added.

Bangkok became involved in China's conflict with the Uighurs, a Turkic ethnic Muslim group that has clashed with Beijing over their treatment, when it decided to deport 109 Uighur migrants back to China in July. 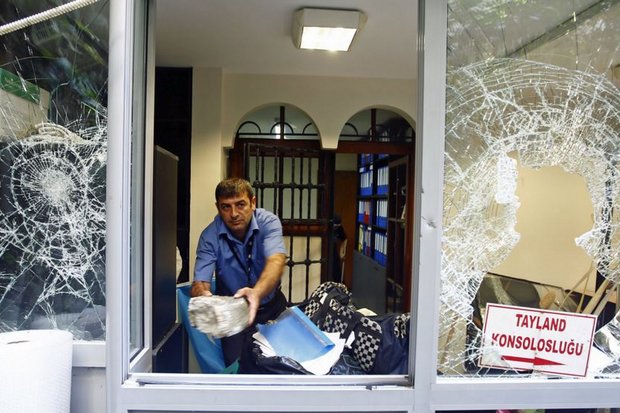 Turkish and Uighur thugs attacked and trashed the Thai consulate in Istanbul on July 8, after Thailand rendered 109 Uighurs to China. (Reuters photo)

The Thai consulate in Istanbul was consequently ransacked by Turkish protesters, believed to be right-wing nationalists, angry at the Thai government's decision to repatriate the refugees, who many say face persecution in China.

Police earlier suspected that the bombing had been carried out by Uighur militants in revenge for the forced deportation.

However, National Security Council secretary-general Anusit Kunakorn was cagey Wednesday over the potential Uighur link to the bombings, saying that the current evidence was not enough to reach this conclusion.

He said it was better to "let the National Council for Peace and Order do the analysis".

Human Rights Watch (HRW) Thailand has demanded clarification over a report by Isra News Agency that the first male suspect arrested over his alleged involvement in the bombing had met the state human rights agency. 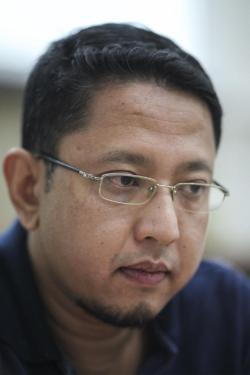 HRW Thailand adviser Sunai Phasuk said Wednesday he was "surprised" by the report about the suspect -- whose nationality has not yet been identified -- and has contacted the Office of the National Human Rights Commission for a response.

He is accused of helping Uighurs enter Thailand illegally so they can make their way to third countries to seek asylum, according to the report.

It cited accounts from some Muslim groups and NGOs working to protect the rights of Muslims and Uighurs.

In response to the bomb blasts in the capital, Prime Minister Prayut Chan-o-cha has set up a new committee to gather a range of security information, ranging from biometric data, criminal records and birth certificates to vehicle numbers, Mr Anusit said.