Wanna Suansan, 27, aka Maisaroh (right) and her Turkish husband Emrah Davutoglu, in a photo taken at Phuket airport on July 1. The couple are wanted for possession of bomb-making material and supplying housing for terrorists at a Min Buri apartment.

A Turkish connection to the Erawan shrine bombing hardened yesterday when the Min Buri provincial court issued a warrant for the arrest of a Turkish national for illegal possession of war materials.

The new suspect was identified as Emrah Davutoglu, a Turkish national and the husband of Wanna Suansan, the only Thai and only female suspect in the Erawan and Sathon pier bombings, according to national police spokesman Pol Lt Gen Prawut Thavornsiri.

Police investigators said Ms Wanna rented a room at the Maimuna Garden Home apartments in Bangkok's Min Buri district where police at the weekend confiscated urea-based fertiliser and other items that can be used to make bombs.

Ms Wanna, also known by her Muslim name, Maisaroh, and Mr Davutoglu are reportedly in Turkey.

On Tuesday, arrest warrants were issued for three other suspects linked to the bombings, with at least one of them, Ahmet Bozonglan, identified as Turkish. 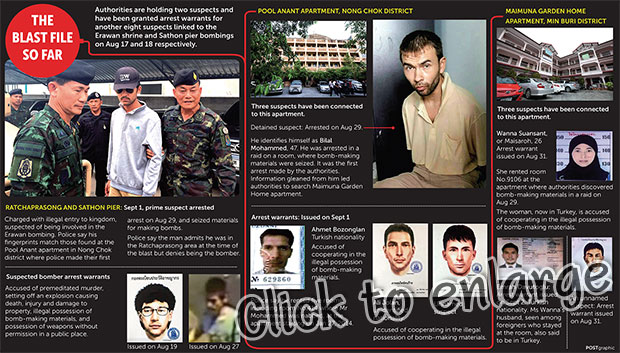 Mr Davutoglu's warrant has brought the total number of arrest warrants to eight. Ms Wanna's warrant was issued on Monday. She has denied all charges.

Pol Lt Gen Prawut Thavornsiri said police have coordinated with Turkish authorities but have not yet received any further information about Ms Wanna, who reportedly got in touch with authorities via social media.

Meanwhile, forensic results have confirmed that the fingerprints of the latest detained suspect match those found on a bomb-making item found in Room 414 at Pool Anant apartments.

The man was apprehended by police at the Thai-Cambodian border and taken to Bangkok for questioning on Tuesday.

A police spokesman said the man is suspected of either assembling or planting explosives, and evidence and witness examination will help police determine exactly what role he played. The suspect is likely to have knowledge about bomb-making, the spokesman said.

According to sources, the suspect admitted that he was near the Ratchaprasong area when the bomb exploded on Aug 17 but he denied any involvement.

He said it was normal for suspects to limit their cooperation with police but investigators would rely on other evidence to prove their alleged involvement.

Asked if the suspect was Uighur, Pol Gen Chakthip said: "He is according to his apparent passport, but we are still waiting for verification that the passport is genuine."

The deputy chief gave assurances that police are on the right track.

"This is progressing faster than other cases. It took 14 to 15 days for police to get a break," he said.

A source at the Metropolitan Police Bureau said police and soldiers conducted a raid Wednesday evening on a company in Silom Road over work permits.

The police are understood to have obtained information that the firm was involved in issuing work permits to predominantly Turkish clientele who wanted to enter and study in Thailand.

The source said the Turkish husband of Ms Wanna, Mr Davutoglu, was involved in bringing several of his countrymen into Thailand.

Another military source said soldiers had detained a Thai man from Narathiwat for questioning after evidence suggested he was connected to Mr Davutoglu. He is currently being held at the 11th Military Circle.

Deputy Prime Minister and Defence Minister Prawit Wongsuwon said more checks are needed to determine if the foreigner arrested on Tuesday is the man in the yellow T-shirt suspected of planting the bomb at the Erawan shrine.

He said Thai officials will request formal nationality verification from the countries of origin once their identities are established.

At this stage, Thai authorities have not contacted any country, China or Turkey, to verify the nationality of the suspects.

"What is important is the network of the suspects, their links and connections," Mr Prawit said, while criticising the media for trying to link the bombings to foreign groups.

The Turkish embassy on Wednesday issued a statement raising questions about "speculative news reports" regarding the nationalities of the arrested as well as those yet to be brought in.

"Information has been requested as to whether the suspect arrested on Aug 29 is a Turkish citizen, and about the Turkish passports which have been televised in the news. The embassy is awaiting an official reply from Thai authorities," read the statement.

Foreign Ministry spokesman Sek Wannamethee said the ministry has been working closely with security experts and officials at foreign embassies regarding the bombing attack and suspects.

However, he said details could not be discussed because of the ongoing police investigation. The ministry cannot verify if Ms Wanna is currently in Turkey.

Meanwhile, police are asking the public for help in locating another man, wearing a blue shirt, and seen on surveillance footage taking a photo of a friend at the shrine.