Two men were killed in a train-truck collission in Nakhon Sawan province on Sunday. (Photos by Chalit Poomruang)

NAKHON SAWAN — Two men were killed Sunday in Takhli district after their six-wheel truck cut in front of a moving train and was struck before it could cross the tracks.

The two men were identified as Phakorn Sangnoi, 28, and Yod Jeenkrachan, 35. Both were employees of a company transporting canned foods and drinks. Phakorn was the truck’s driver and Yod was a salesman.

Phakorn cut in front of a packed rapid Bangkok-Den Chai train No 111 at the ad hoc crossing where there were no lights and barriers, Pol Lt Bonchote quoted witnesses as saying.

The train packed with passengers dragged the truck’s tractor along the tracks for about 400 metres before it stopped. Phakorn and his colleague were thrown out of the vehicle by the impact and were found dead on the grass near the wreckage of the truck. A train passenger sustained a head injury in the collision which also left the train locomotive broken and the tracks littered with a large amount of canned drinks spilled from the truck.

Train services were halted for about an hour as railway and rescue workers clear the wrecked truck and changed the locomotive.

Pol Lt Bonchote said the State Railway of Thailand would seek compensation from the deceased’s company for damage caused to its locomotive. 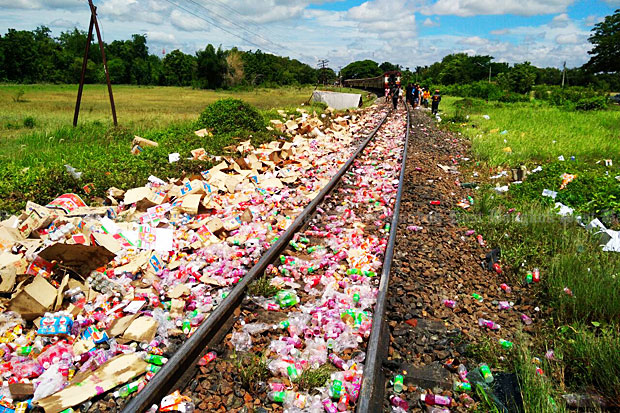