Jiang Sulian, 39, a Chinese woman who stole and swallowed a six-carat diamond worth 10 million baht allowed doctors with surgical pliers to go in and retrieve it during a 12-minute operation on Sunday. (Photos by Pornprom Satrabhaya)

Police on Sunday retrieved a 10-million-baht stolen diamond from a Chinese woman, who swallowed it after stealing it from a jewellery fair, after doctors using surgical pliers extracted it from her body.

Jiang Sulian, 39, swallowed the six-carat diamond after stealing it from the Bangkok Gems and Jewellery Fair at Impact Muang Thong Thani in Nonthaburi on Thursday by swapping the real one for a fake one.

She admitted on late Friday night that she swallowed the diamond on Thursday morning after stealing the diamond at the fair after an X-ray scan showed a diamond-like object in her large intestine, police said.

The mission to regain the diamond was accomplished after she allowed doctors at Police General Hospital to use pliers to retrieve it.

She was given laxatives on Friday night when she was detained at Pak Kret police station in Nonthaburi to retrieve the gemstone. The effort failed. 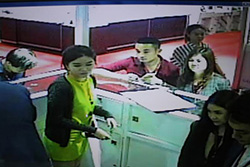 If the operation to use the pliers to retrieve the diamond had failed, doctors had planned to have her undergo surgery. They say the suspect had given her consent. Pol Maj Gen Sanit said police will take the diamond to the owner to verify that it is real.

Pol Maj Gen Sanit said the suspect is staying at the hospital to regain her strength before being sent for detention at the Nonthaburi court.

Mrs Jiang and her male accomplice, identified as He Ying, 34, were held at Suvarnabhumi airport on Thursday night as they were leaving Thailand on suspicion of stealing the six-carat diamond. Video footage from CCTV cameras at the Challenger building where the fair is being held showed the two Chinese at the booth.

Immigration police later detained a Chinese couple whose appearance matched that in the video images. They initially denied the accusation, claiming they were just tourists. 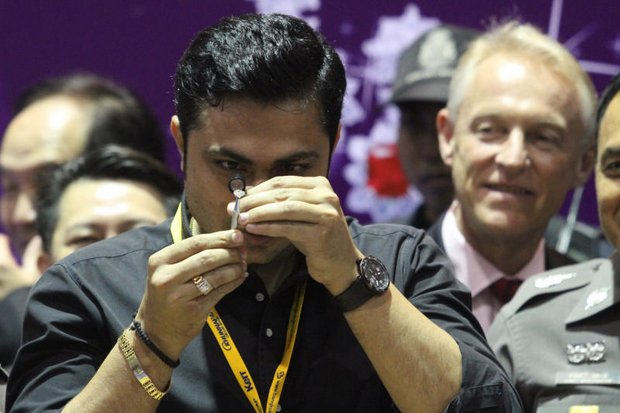 Gem expert examines the stone removed from Ms Jiang. Tests will confirm it is a genuine diamond.

It took 12 minutes for doctors at the Police General Hospital on Saturday to get a stolen diamond worth around 10 million baht from the body of a Chinese woman.

Three days after Jiang Sulian swallowed the six-carat diamond after allegedly stealing it from the Bangkok Gems & Jewelry Fair, the mission to regain it was accomplished after she allowed the doctors to use a plier to retrieve it from her intestine.

Pol Maj Gen Sanit Mahathavorn said Mrs Jiang agreed to the doctors' advice after feeling exhausted from being forced to take a laxative to retake the gemstone, several media reported.

The doctors spent only 12 minutes to take the gemstone from her body, the deputy commander of the Police Provincial Region 1 added.

The doctors would have used surgery if the first plan failed.

Pol Maj Gen Sanit said police will take the diamond to be verified by the owner that it is real.

The 30-year-old suspect was sent to the hospital on Saturday in an unsuccessful attempt by authorities to regain the diamond.

She swallowed it on Thursday morning at the fair held at Impact Challenger in Muang Thong Thani. The venue is in Pak Kret district in Nonthaburi province.

An x-ray examination revealed the diamond was lodged in Ms Jiang's intestine.

Pol Maj Gen Sanit said the suspect is staying at the hospital to regain strength before being sent for detention at the Nonthaburi court.

She and her male accomplice, Hae Ying, were arrested at Suvarnabhumi airport on Thursday night after stealing the diamond from M Tarun Co in the morning.

The fair started on Thursday and runs through Monday.

NAKHON SI THAMMARAT: A rubberwood processing factory in Bang Khan district of this southern province has been ordered closed for 14 days until Aug 7 after 221 workers were found infected with Covid-19, the provincial communicable disease committee announced on Sunday.

NEW DELHI: Swathes of India are battling deadly floods and landslides after heavy monsoon rains, just the latest example of how the vast country is on the frontline of climate change.

PARIS: Leading automakers have signalled their intention to scrap internal combustion engines by 2030 or cut back sharply on their production as the sector turns towards electric vehicles.