Three witnesses have supplied police with fresh information on the main suspect in last month's Sathon pier bombing, leading officers to release an identikit image of the suspect yesterday. 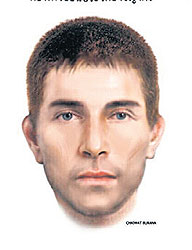 The witnesses — Jawed Iqbal, 59, a Pakistani national; Panissara Chaleerattarom, 40, the wife of bombing suspect and alleged human trafficker Abdul Tawab; and taxi driver Chob Sakulthong, 54 — were detained by the military on Friday before being interrogated by police investigators.

Police spokesman Prawut Thavornsiri said the witnesses had revealed that a taxi driver may have been complicit in the Sathon pier attack, which came a day after the deadly Erawan Shrine blast but did not result in any injuries.

The unidentified taxi driver is allegedly involved with people smuggling networks, and dropped the Sathon bombing suspect near the scene of the blast on Aug 17, the day police believe the bomb was planted. The driver is now the target of a police search said.

Pol Lt Gen Prawut said the Pakistani witness had admitted to twice meeting Yusufu Mieraili, 25, who has been detained by police for his alleged role in supplying explosives for the Erawan blast. Police say none of the witnesses, who were released on Friday night, played a role in the twin bombings.

The witnesses helped officers gain a clearer picture of the Sathon pier suspect, who until then had only been seen by investigators in grainy CCTV footage taken from the scene.