Mr Karadag is brought to the Min Buri court on Sept 5, 2015. (File photo by Thanarak Khunton)

Police on Saturday said a foreigner held in custody over last month's deadly Bangkok attack was the same yellow-shirted man seen on CCTV placing a rucksack at the shrine moments before the blast. 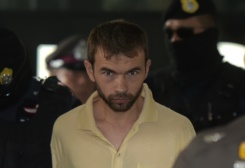 A suspect identified by police as Adem Karadag is escorted upon his arrival at the Court in Bangkok, on Sept 5, 2015.

Authorities have earlier said it was unlikely that either of the two men detained over the Aug 17 blast, which left 20 dead, were the bomber in what has been an often confusing and contradictory police investigation.

"It is confirmed that Adem is the man in the yellow shirt based on CCTV footage, eyewitness accounts and his own confession," Pol Lt Gen Prawut said.

"After he placed the bomb at the shrine he called a motorbike taxi and changed his shirt at a restroom in (nearby) Lumpini Park."

Mr Karadag's lawyer — who says his client's real name is Bilal Mohammed — could not immediately be reached for comment but earlier this week had cast doubt on rumours of his confession to the crime and has said his client was not in the country at the time of the attack.

Mr Karadag is due to undergo a reenactment of his alleged role in the crime — a standard Thai police procedure — starting at the shrine from 11am.

The unprecedented attack in the heart of Bangkok's bustling downtown district last month stunned the nation and dealt a fresh blow to Thailand's reputation as a tourist haven.

The majority of the blast's fatalities were Chinese visitors, who believe prayers at the shrine bring good fortune. More than 100 other people were left injured.

The motive for the bombing remains unclear but this month Thailand's police chief linked the attack to China's Uighur minority for the first time, after weeks of speculation over their role.

Somyot Poompanmoung blamed the blast on a gang of people-smugglers motivated by revenge for a crackdown on their lucrative trade including the transfer of Uighurs.

That motive has been widely dismissed by security experts who instead have pointed to Thailand's forced deportation of 109 Uighurs to China in July, a move that ignited anger in Turkey where nationalist hardliners see the minority as part of a global Turkic-speaking family.

Mostly Muslim Uighurs have long accused Beijing of religious and cultural repression in China's far western Xinjiang region, with hundreds of refugees believed to have fled in recent years, often heading to Turkey via Southeast Asia.

Police arrested Mr Karadag in a flat on the outskirts of Bangkok late last month saying he was in possession of bomb-making equipment and dozens of fake Turkish passports.

The other man is custody has been identified as Yusufu Mieraili, who was seized with a Chinese passport that police believe is real. It notes Xinjiang as his birthplace.

Mr Karadag's lawyer Chuchart Kanphai has previously said his client was born in Xinjiang's capital, Urumqi, but moved to Turkey in 2004 where he received Turkish nationality and found work as a truck driver with his brother.

He entered Thailand on Aug 21, four days after the bomb blast, with the aim of finding work in Malaysia, the lawyer has said.

LONDON: Christine McVie, whose songwriting and signature vocals helped make British-American group Fleetwood Mac one of the best-selling rock bands of all time, died on Wednesday. She was 79.