Yusufu Mieraili, a prime suspect in the deadly Erawan shrine bombing on Aug 17, is taken for a re-enactment of the crime on Saturday together with another key suspect, Adem Karadag, amid tight security. (Photo by Thanarak Khunton)

Two key suspects in last month’s Erawan shrine bomb blast were taken to the scene for re-enactment amid tight security on Saturday afternoon. 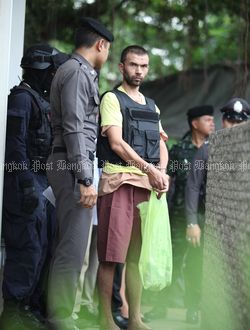 The two suspects had confessed they had met at Hua Lamphong railway station before separating. Mr Karadag went to the Ratchaprasong intersection to place a bomb-filled rucksack at the Erawan shirne on Aug 17. He then went to a toilet at Lumpini park to change his yellow shirt to a grey one before returning to his accommodation in Nong Chok district of Bangkok.

Mr Karadag, also known as Bilal Turk, was identified by police as the yellow-shirted man based on CCTV footage that captured him planting the deadly bomb at the shrine. He was taken to the shrine as the first spot for the re-enactment.

Another team of security officers took Mr Mieraili to the fountain at the open plaza in front of CentralWorld shopping centre, opposite the Erawan Shrine, where he waited and later detonated the bomb from a mobile phone. After the blast, he threw the cell phone into Saen Saep canal in Pratunam area.

The re-enactment drew attention from many people and tourists. Traffic in the areas were temporarily closed.

Mr Karadag, 28, was the first suspect detained in connection with the shrine bombing and the Sathon pier blast the following day. He was  arrested at his rented room at Pool Anant apartment building in Bangkok's outlying Nong Chok district on Aug 29. Bomb-making materials were found in the room, along with many forged Turkish passports. Mr Mieraili was apprehended in Aranyaprathet district of Sa Kaeo on Sept 1. 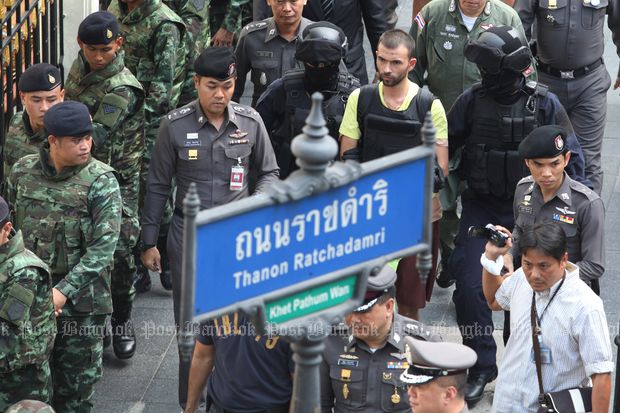 Mr Karadag is brought to the Erawan shrine. (Photo by Thiti Wannamontha)