The government is threatening legal action against web activists who launched cyber attacks on state agency websites on Wednesday in a bid to derail the government's proposal to restrict the flow of online information, causing sporadic disruptions of several government home pages.

Government spokesman Maj Gen Sansern Kaewkamnerd told a news conference Thursday at the Ministry of Information and Communications Technology (ICT) the Wednesday attacks -- which disrupted access to digital information and may have damaged government data -- violated several sections of the 2007 Computer Crime Act, which carries a maximum fine of 300,000 baht and/or 15 years in jail.

The activists on Wednesday night and Thursday repeatedly refreshed the home pages of government websites simultaneously, a tactic known as a distributed denial of service attack (DDoS), to overload servers and make the web pages slow or temporarily unavailable.

"We understand the protest on Wednesday was meant as a symbolic move to oppose the concept of a single gateway, so the ministry will not take any legal action against them," said ICT Minister Uttama Savanayana. 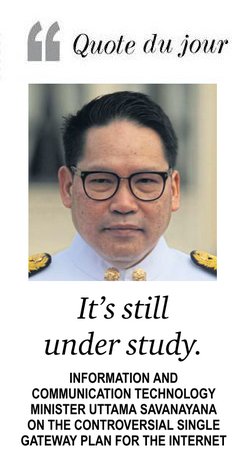 Mr Uttama, who has been in the post only a little over a month, urged netizens to stop attacking state websites again because it will affect people trying to access information and contacts they need.

"If they do it again and a third party presses charges, we will need to abide by law," he said.

The "virtual sit-in" by netizens was protesting against an NCPO proposal to create a single gateway to the internet that will restrict access to information on the web, according to Arthit Suriyawongkul, of the internet freedom activist group Thai Netizens Network.

The DDoS is an electronic civil disobedience technique commonly used by "hacktivists" for political purposes, Mr Arthit wrote on Facebook. Such campaigns are non-violent forms of protest, he said, although they are widely seen by authorities as criminal acts.

The secretariat of the cabinet had issued a circular on Aug 27 outlining the prime minister's instructions for various ministries to begin the project, according to a source.

The ICT Ministry was instructed to accelerate the development of a single gateway and report progress to the prime minister this month, in line with a cabinet resolution on Aug 4 ordering agencies to complete projects including the single gateway by the end of the 2015 fiscal year.

Mr Uttama said the single gateway is a way to protect Thai youth so that they browse the web appropriately and constructively. Earlier, Deputy Prime Minister ACM Prajin Juntong cited cost savings on IT infrastructure as the reason for the consolidation.

But an army source has told the Bangkok Post the single gateway will be implemented to control access to websites deemed inappropriate and monitor the influx of information from abroad.

The National Council for Peace and Order (NCPO) is concerned about the increasing number of political messages conveyed online criticising the government and defaming the monarchy, the source said.

The plan is designed to target websites with domains registered abroad, which the Thai government cannot order closed down, the source added.

Thailand now has 10 international internet gateways, with a total international bandwidth of 1,954 gigabits per second, according to Nectec data as of Sept 7.

Meanwhile, Suwaphan Tanyuvardhana, a PM's Office Minister, said the single gateway system is only one of many proposals being considered to deal with cybersecurity threats. The government would not infringe on private rights, he said.

The PM's Office echoed that the plan was not definite, saying it was "under study". "The prime minister did not say the government would [definitely] launch the system," Minister ML Panadda Diskul said.

ML Panadda admitted a single gateway carries the risk of a nationwide internet collapse and makes attacks easier. Still, he said, it cannot hurt to study the proposal.

The Pheu Thai Party on Thursday also voiced its opposition to the single gateway, saying it would do more harm than good, according to Pheu Thai's former ICT minister Anudith Nakornthap and deputy spokesman Anusorn Iamsa-ard.

"A single gateway handling a lot of data might cause a nationwide internet collapse if any technical problem arises," said Gen Anudith.

It will have a huge impact on business and cause investors to lose confidence in the country's internet services, he added. "Thailand will have no chance to become the centre of Asean's digital economy."