PATTAYA — The body of a 54-year-old Russian man was found hanged from a tree behind a temple in Chon Buri’s Bang Lamung district on Saturday.

The Russian national (name withheld), wearing a red sport T-shirt and black shorts, had a nylon rope around his neck, with the other end tied to a tree in a forest behind Wat Krathueng Thong on Jomtien beach, said Pol Lt Nakhonrat Nonseelad, a duty officer at Pattaya police station, who was alerted at 10.30am on Saturday.

Rescue workers took the body down and police believed he died at least 3-4 hours before his body was discovered.

Phra Subin Suksawat, a 30-year-old monk, told police that the Russian had met the abbot of his temple three days ago to seek permission to stay at the temple.

According to the monk, the man told him his Thai girlfriend had deceived him into handing over his money, leaving him penniless. He had nowhere to stay and had only a set of clothes, a passport and a bank account with a small amount of money.

The abbot sympathised with him and allowed him to stay, said Phra Subin.

During his stay, the man helped sweep the temple’s yard and followed monks to collect alms. Many monks liked him and gave him some money for personal use. 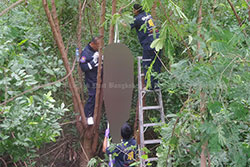 Rescue workers retrieve the body of a Russian man found hanging from a tree behind a temple in Chon Buri on Saturday. (Photo by Chaiyot Phuttanapong)

According to Phra Subin, the man told him that he was an employee at a company in Moscow. After he had saved 600,000 baht, he flew to Thailand for a holiday in Pattaya, where he met a Buri Ram woman. Their relationship had grown and they became a couple. He alleged that the woman had deceived him into giving her all of his money and left him. He had only 400 baht left in his bank account.

Before the tragedy, the man also complained about an acute stomachache so painful he said he wanted to hang himself.

Police believed the foreigner might have been stressful and this drove him to take his own life.

His body would be sent to Police General Hospital for a post-mortem to confirm the cause of his death. Authorities would contact the Russian embassy to report about this death.