The list of NRSA members was revealed yesterday and their selection will come into effect after the names are formally announced in the Royal Gazette, Deputy Prime Minister Wissanu Krea-ngam said.

Seventeen are women and 183 are men, he said.

Other former NRC members in the group that voted down the draft are well-known figures such as Manu Liawpairoj, Pol Maj Yongyuth Sarasombat, Gen Yuthasak Sasiprapha, Worawit Sri-ananraksa and Gen Watthana Sanpanich.

Wanchai Sonsiri and Seri Suwanphanon, two former NRC members who had openly campaigned against the draft, were also chosen as members of the NRSA. 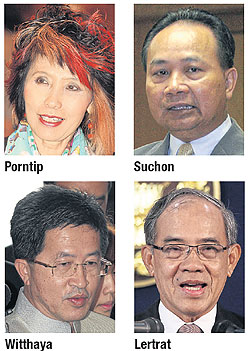 Amphon Jindawatthana, who was among the seven who abstained in the draft charter vote, was also selected as an NRSA member.

Other members of the NRSA include 10 politicians and media professionals along with 19 experts, Mr Wissanu added.

After the draft charter was rejected on Sept 6, suspicions emerged that certain members of the NRC voted down the draft in the hope they would be chosen for the NRSA.

The NRC's rejection of the draft by 135-105 votes with seven abstentions effectively pushes back elections to about April 2017.

NRC members with close ties to the military reportedly lobbied heavily to reject the draft that contained the controversial "crisis panel" that would allow a 23-man body to take over executive and legislative powers from an elected government if a national crisis took place.

The vote brought about the end of the NRC, but the NRSA was established afterwards to replace it.