In a much-seen Twitter exchange, the convicted drink-driving killer Pakorn "Dome" Lam pours himself a Chang beer, with nice words for the brewer. Anti-drink activists want a government investigation. (Screen grabs from Instagram)

Health activists have called on the Public Health Ministry to investigate Chang Beer's alleged social media campaign using celebrities posting image of themselves with bottles of the brew.

Critics slammed Pakorn "Dome" Lam earlier this week for posting a photo of himself on Instagram pouring Chang beer, with the label clearly showing and a caption saying, "Let's the party begins [sic]".

The posts by various celebrities on Instagram with similar messages encouraging the public to drink Chang beer has raised suspicions of tacit advertising aimed at social media users.

Pakorn, who was arrested for drink driving resulting in two deaths in 2001, denied being paid for posting the photo. The actor later apologised for his "inappropriate" snap and has now taken down all his photos with alcoholic drinks in them from Instagram.

Songkran Pakchokdee, director of the Stop Drink Network, said legal action could be taken against the manufacturers and celebrities if evidence surfaced to prove the Instagram photos were in fact advertisements.

Section 32 of the Alcohol Control Act bans anyone from advertising alcoholic drinks and from showing the names and logos of alcoholic drinks to promote them. "It's not a good idea as they are role models for youth," said Mr Songkran. "Such photos also give the celebrities a bad image," he added. 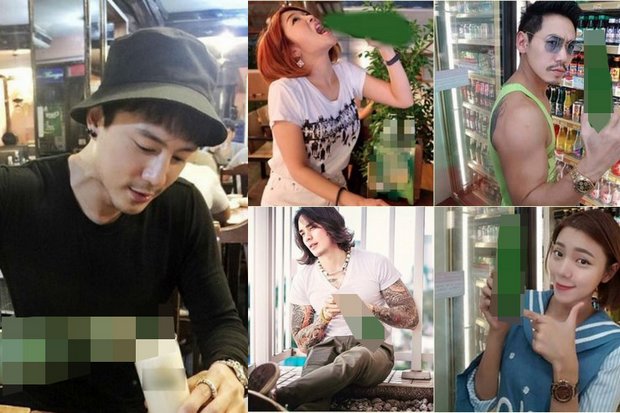 Not only Dome is involved in what prohibitionists believe is a sponsored social-media campaign for the beer. Many photos of celebrities and wannabes have recently appeared on popular Twitter and Instagram feeds - although most have been deleted, too late for screen captures.

The controversy began when Piti Bhirombhakdi, the heir of Singha Beer -- Chang's arch rival -- criticised unethical social media marketing using celebrities to "advertise" Chang on Facebook. He also admitted one of his staff members ran a similar campaign, for which he was sacked.

The Instagram photos -- which went viral -- have sparked a public outcry and triggered a debate on the enforcement of product placement laws and loopholes.

According to the law, producers of alcoholic drinks are only allowed to advertise products by giving constructive information to society without showing pictures of the products, their packaging or containers.

The network and youth groups will ask the Office of the Committee for Alcohol Beverage Control (CABC) to launch an investigation into the case.

A source at the CABC  said Thursday the posting of the pictures might be in violation of Section 32. However, the office will have to decide whether those who posted the pictures intended to publicise and promote the product.

Asadang Ruayajin, director-general of the Department of Disease Control, said the department would look at three issues: if the pictures were taken in private; the intention and message of the posts; and if the celebrities had been paid.

"But we can't say at this stage that the DDC will take legal action against the celebrities," he said.

Marketing expert Thanyawat Chaitrakulchai said the images could be interpreted as a celebrity marketing campaign, despite the absence of proof.

People would ask themselves how several celebrities happened to be photographed with the same product, during a period coinciding with the product's repackaging, Mr Thanyawat said.

The law banning alcohol advertisements on mainstream media channels does not apply to social media, he said.

A public relations official at Chang brewer, Thai Beverage, who asked not to be identified said Instagram is a private platform on which celebrities have the right to post pictures of themselves holding a beer bottle.

"Parts of Instagram can be bought as commercial space to run advertisements. Viral marketing has a lower budget, but works more efficiently."

What is publicly posted on social media is subject to scrutiny and interpretation, said Mr Thanyawat. If celebrities want it to be private, they should change their privacy settings, he said.

Wichian "DJ Petjah" Kusolmanomai and Poomjai "DJ Poom" Tangsanga, who are among the seven celebrities, said they have been working with Chang and are good friends, while denying they were paid for the Instagram posts.

Wichian said he is aware advertising alcohol beverages is illegal, so he often posts photos of himself drinking not for business purposes, but to "show his lifestyle". He said Pakorn is famous so he is an easy target of the public.

Poomjai, who has almost 400,000 Instagram followers, said he had been paid for advertising on other occasions, but not this time. "I'm really close with the company now. I will do it for free."