A farmer takes his cows to find grass in a paddy field in tambon Wang Nam Khao, Sukhothai province on Friday. Severe drought has affected food and water sources for people and animals in the community. (Photo by Phubes Faites)

Chamlong Artyai, village chief for tambon Wang Nam Khao, said on Friday that all water sources in his community ran dry in the absence of rainfall. Vast areas of paddy fields, sugarcane and cassava plantations have been damaged for the second year this year.

This plunged farmers into heavy debt. Worse still, they had no rice kept in their stockpiles to eat this year, said the local leader.

Cattle also suffered malnutrition due to lack of water and grass. A public pond that was a main source of tap water in the community also has dried up. 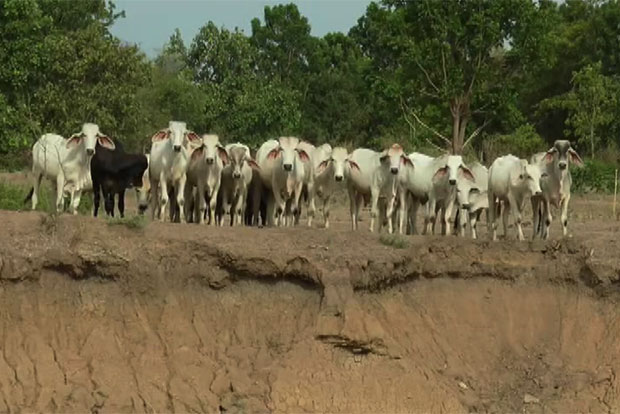 Cattle stand over a dried-up pond in a drought-hit village at tambon Wang Khao in Sukhothai. (Photo by Phubes Faites)