Eleven Vietnamese crewmen squat aboard one of the two modified boats seized for illegally fishing in Thai waters off Narathiwat on Saturday. (Photo by Waedao Harai)

Marine police stopped the two boats 20 nautical miles off the southern provinces at 10am on Saturday following a tip-off that foreign vessels were illegally catching fish in Thai waters.

The boats, modified to look like Malaysian vessels, were using destructive drag-nets to catch fish when the officers stopped them for a search.

Five Vietnamese men, including the skipper and four crewmen, were arrested from the first boat. Six Vietnamese crew members were apprehended from the second boat.

The two skippers confessed they had modified their vessels to look like Malaysian boats in a bid to conceal their activities in Thai territorial waters.

The 11 Vietnamese crewmen were being held in police custody to face charges of illegally entering the country and illegally fishing in Thai waters. 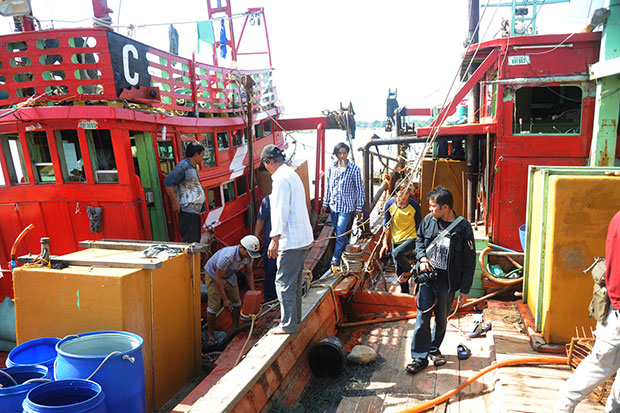 The seized Vietnamese vessels had been modified to look like Malaysian boats and attract less suspicion, their skippers reportedly said. (Photo by Waedao Harai)