Two rangers were killed and five others wounded in a bomb blast on a road in Sai Buri district of Pattani province Monday, police said.

The explosion occurred about 7.20am while a detachment of rangers from Company 4407 of Rangers Task Force 44 was on patrol in an armoured vehicle on a country road in tambon Manang Dalam.

As they approached Manang Dalam village, a bomb planted by the roadside was detonated remotely. The vehicle was thrown off the road by the force of the blast.

Three of them were in serious condition, according to Sai Buri police.

Another bomb planted nearby exploded as a team of reinforcements arrived, but caused no injuries.

Army chief Theerachai Nakvanich said he regretted the loss of life, particularly those of rangers carrying out their duty. He asked the new 4th Army chief Lt Gen Wiwat Pathomphak to handle the southern situation with care.

"We have to proceed with peace talks along with enforcing law and order to show the government is sincere about building peace," Gen Theerachai said, adding the Pattani bomb attack was not related to the rotation of armed forces in the deep South. 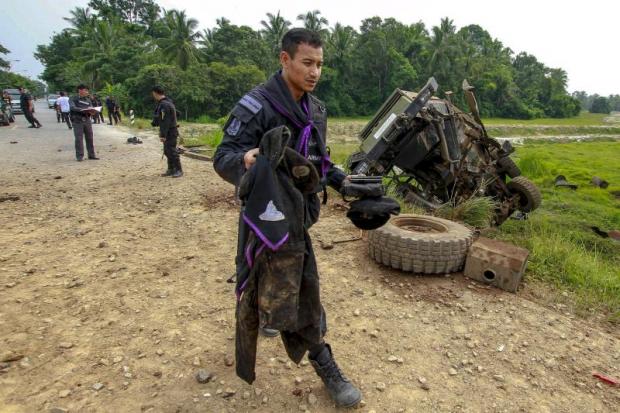