The Defence Ministry Monday gave the public another look at its locally developed 8×8-metre armoured vehicle known as the "Black Widow Spider", at the opening of an international defence and security trade show at Impact Muang Thong Thani. 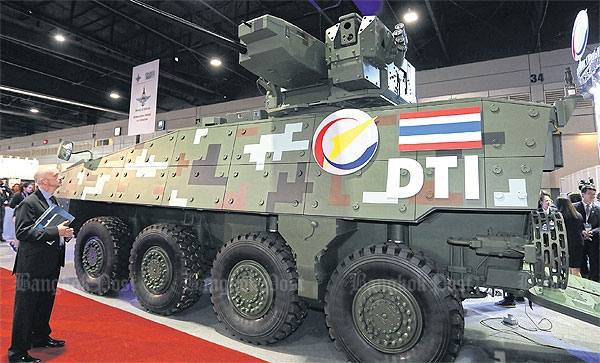 The Defence Technology Institute introduces the “Black Widow Spider”, the first armoured car to be built in Thailand, at the Defence & Security 2015 exhibition at the Impact Arena. PATTANAPONG HIRUNARD

The vehicle, locally produced, was designed and developed by the Defence Technology Institute (DTI) in collaboration with the National Metal and Materials Technology Centre (MTEC) and a private firm.

He said it took the DTI research team about two years to develop the armoured vehicle, a relatively short period compared to most other countries which can spend no less than 10 years on a military vehicle programme.

Designed as an amphibious vehicle, it can accommodate up to 12 personnel and may be armed with a gun turret for a 30-mm cannon. The vehicle can be used in various missions and can serve as a command vehicle.

The armoured hull is in compliance with Stanag 4569, which means it can provide protection against all small arms fire and from 0.57-calibre machine guns at 200 metres and can withstand blasts from 155mm artillery shells at 30 metres. It can provide a high level of performance in crossing variable terrains.

He said the institute has come up with more than 20 defence and security projects in 2014-2015. Several of them showcased at Defence & Security 2015, the exhibition which opened Monday and runs until Thursday, have been handed over to the military.

Among the highlights are unmanned aircraft, combat simulation systems and a prototype of the Black Widow Spider mounted with a 122mm rocket launcher.

Defence & Security 2015 showcases the work of more than 400 leading international manufacturers to showcase and promote the latest defence technologies. Participants from more than 25 countries are expected.

Talking to reporters, Gen Prawit said he received assurances from his Ukrainian counterpart Stepan Poltorak about ongoing bilateral defence cooperation. He also said Ukraine would deliver five Oplot battle tanks to the army at the end of this year and a batch of 40 BTR armed personnel carriers early next year as scheduled.

The pilot was seriously injured when an F-5 fighter jet crashed during training in Chai Badan district of Lop Buri province on Friday morning.