A monk prays at a Nov 1 ceremony to move Lord Buddha’s relics from Mahiyangana Raja Maha Viharaya in Sri Lanka to Buddha Monthon monastery in Nakhon Pathom. A campaign to enshrine Buddhism as Thailand's state religion has been galvanised by a radical Buddhist movement in neighbouring Myanmar that is accused of stoking religious tension. (Photo by Pattarapong Chatpattarasill)

A campaign to enshrine Buddhism as Thailand's state religion has been galvanised by a radical Buddhist movement in neighbouring Myanmar that is accused of stoking religious tension, the leader of the Thai bid said.

Experts say the campaign could appeal to Thailand's military junta, which is struggling for popularity 18 months after staging a coup, and tap into growing anti-Muslim sentiment in a country that prides itself on religious tolerance.

While Buddhists form an overwhelming majority in both countries, Thailand has avoided the nationwide religious violence that has killed hundreds of people in Myanmar, most of them Muslims.

Now, Thai campaigners want Buddhism to be made the country's official religion in a new constitution.

They draw inspiration from Ma Ba Tha, a powerful monk-led group that pushed Myanmar's government to pass a raft of pro-Buddhist legislation.

"What happened in Myanmar confirms our suspicions that Buddhism is threatened by various subtle means," said Thai campaigner Banjob Bannaruji, who chairs the Committee to Promote Buddhism as the State Religion.

Mr Banjob said Thai Buddhists have pushed for the state religion law for many decades, but Myanmar's example had spurred them to speed up "concrete efforts to make it happen". 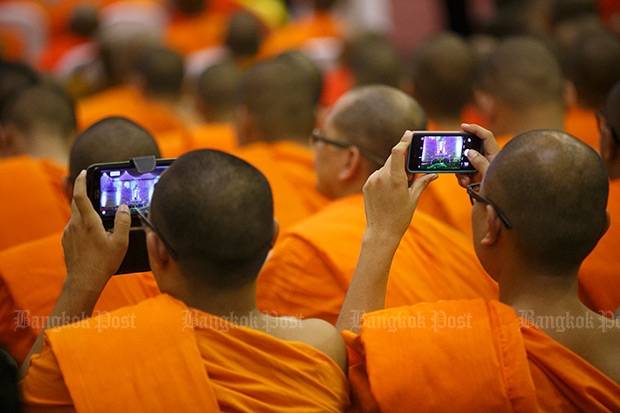 Religious experts question whether radical Myanmar Buddhism can take hold in Thailand, a country that prides itself on religious tolerance, despite growing anti-Muslim sentiment. (Photo by Pattarapong Chatpattarasill)

Thailand's constitution was scrapped after the military seized power in May 2014 and handpicked a committee to write a new one. It must pass a referendum before a general election, possibly in 2017, can restore democracy.

A previous attempt to include Buddhism as the state religion in the 2007 constitution, written after an earlier military coup, went nowhere.

But campaigners stand a better chance this time round, said Ekachai Chainuvati, a constitutional law expert at Siam University in Bangkok.

Adopting Buddhism as a state religion could give the constitution more popular appeal and improve its chances of passing a referendum, he said.

Amorn Wanichwiwatana, spokesman for the Constitution Drafting Committee, said he could not comment on the likelihood of the idea being adopted. "But we have to listen to every suggestion," he said.

While Ma Ba Tha's influence has grown, Thai Buddhism has been shaken by scandal. Monks have been accused of stealing, hoarding narcotics or having sex, prompting many to call for an overhaul of the institution.

His group plans to collect a million signatures at religious functions and via the internet to petition the Constitution Drafting Committee.

Government statistics do not suggest a religion in decline. 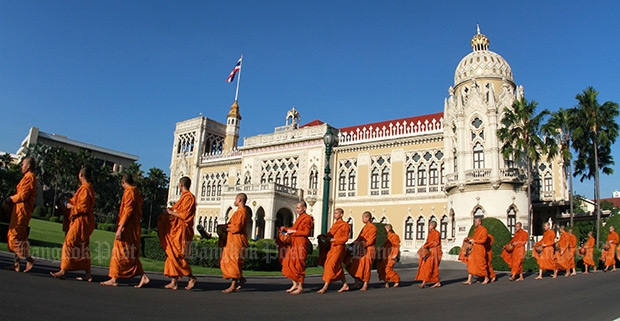 Monks form a procession to seek alms during a merit-making event a Government House on Oct 30. Thai Buddhism has been shaken by scandal. Monks have been accused of stealing, hoarding narcotics or having sex, prompting many to call for an overhaul of the institution. (Photo by Thiti Wannamontha)

Even so, said Somchai Surachatri, spokesman for the National Office of Buddhism, a government agency tasked with nurturing the religion, Buddhism could one day be "devoured".

He spoke of receiving text messages warning that Muslims were buying up land to build mosques in every Thai province.

"That's why Buddhists have been uneasy and feel the need to protect their religion," he said.

Such remarks carry echoes of Ma Ba Tha, which claims Islam is eclipsing Buddhism in Myanmar.

Sunai Phasuk, a Thailand researcher for Human Rights Watch, said there was "an increasing sense of suspicion" towards Muslims.

Recent protests by monks and laypeople have halted the construction of mosques and a halal food factory in northern Thailand.

Also driving anti-Muslim sentiment, said Mr Sunai, was a conflict in southern Thailand between government forces and ethnic Malay Muslim insurgents that has killed about 6,500 people since 2004.

The murder of monks by insurgents deserves an equally pitiless response, believes Aphichat Promjan, a monk who teaches at Wat Benjamabophit, a famous Bangkok temple.

For every monk killed "a mosque should be burned, starting from the northern part of Thailand southwards", Mr Aphichat wrote on Facebook on Oct 29.

The post, accompanied by gruesome images, has been shared or liked almost 2,000 times, but it also sparked disdain.

"I don't agree with this violent idea, which is like pouring fuel onto fire," one person commented in Thai.