Col Khachachart Boondee, commander of the 1st Artillery Regiment, has been charged with lese majeste and abusing his authority for personal gain in two criminal cases, a source at the National Police Office (NPO) said Sunday.

The charges were filed by the Internal Security Operations Command (Isoc) on Saturday. The same charges were also pressed against fortune-teller Suriyan "Mor Yong" Sucharitpolwong and Mr Suriyan's close aide, Jirawong Watthanathewasilp, the source said. The colonel has reportedly fled to Myanmar. 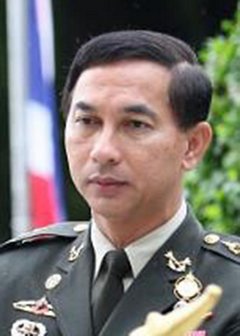 It was mentioned in the first complaint filed that the misconduct in the past event occurred at the 11th Infantry Regiment in Bang Khen district, and at the company CP All Plc in Bang Rak district of Bangkok between May and Aug 6.

The misconduct linked to the future event, meanwhile, occurred at King Power Co in Ratchathewi district of Bangkok on Sept 20, according to the second complaint filed Sunday by Maj Gen Wijan.

Mr Suriyan, along with Mr Jirawong and Pol Maj Prakrom Warunprapa -- a computer crime officer who committed suicide while in custody -- have previously been accused of making false claims involving the monarchy to solicit money from business operators.

In another development, the source said a panel probing alleged irregularities in the construction of the army's one-billion-baht Rajabhakti Park in Prachuap Khiri Khan's Hua Hin district found that aside from irregularities surrounding the making of the king statues, the purchase of palm trees at 100,000 baht each was also unusual.

No one has been charged so far.

The panel began its work after the Central Investigation Bureau (CIB) found some links between a group of people, including an army major general and a colonel, and the alleged irregularities in the park project, said the source.

The CIB team investigating the Rajabhakti Park case have already questioned the owners of six casting factories that built statues for the park and revealed its findings to a meeting held Sunday at the CIB's headquarters.

According to a source, after questioning the owners it was discovered around 20 million baht of kickbacks were allegedly paid through an amulet businessman and an army colonel who helped secure the deals for the factories.

The owners of Phutthapatima Promrungsee Co, in Bangkok's Thawi Watthana district, operated by Rungthip Thongsri, said that out of the agreed price of 43 million baht for casting the King Rama I statue for the park, the company paid 4.7 million baht in "commission" to the amulet businessman.

Chour Pratimakam Industry Co in Nakhon Pathom, owned by Chamnan Pratimakam, told investigators that the same businessman requested a 10% commission in return for helping secure the contract to build the statue of King Ramkhamhaeng for the park, said the source.

This company won a contract to build the statue at a cost of 43 million baht, plus additional work involved in building a phan phum tray casting for 10.8 million baht, said the source.

The same colonel allegedly asked for an additional 300,000 baht for his help in securing the contract for the work, said the source. 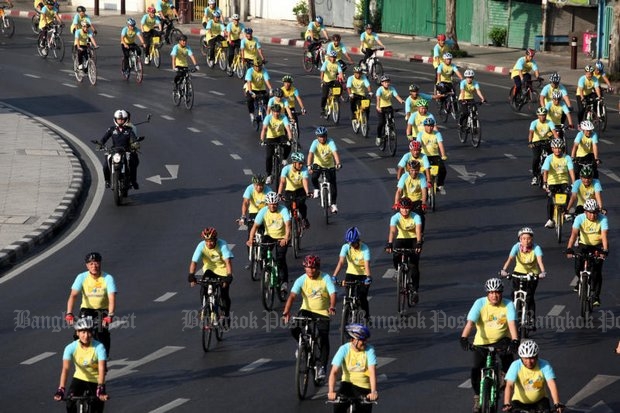 There are almost five weeks to go before the first Bike for Dad ride, and two-wheel fans were out on Sunday with police supervision, testing part of the route. Major scandals surround pre-ride promotion activities. (Photo by Wichan Charoenkiatpakul)