Surin man thought to be world's tallest dies at 26

A man who once stood 269 centimetres tall and was thought to be the world's tallest person has died at his home in Surin province at the age of 26. 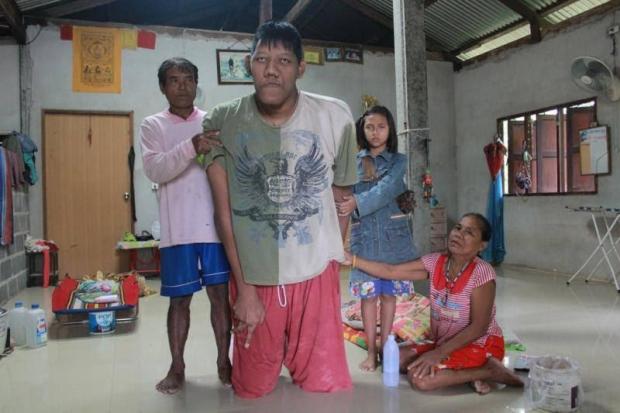 Pornchai Saosri in happier times, with his mother, father and niece at his home in Prasat district, Surin. He died yesterday, aged 26. Nopparat Kingkaew

His mother, Wern Saosri, said Pornchai Saosri died at 10.05am yesterday at their home in Ban Takaeo village in Prasat district.

Pornchai had suffered from many illnesses related to his abnormal height and hypertension.

He had been treated in Prasat Hospital for eight days before recently being released and taken back home.

He was bedridden and being cared for by his father Saran, 60, Ms Wern, 56, and their 15-year-old granddaughter.

She said after Pornchai's illness and his abnormal height were reported by the media, people across the country sent donations.

She said she spent part of the money on her house, which she was forced to remortgage to pay for Pornchai's medical care and other necessities before his death.

Ms Wern said she had about 50,000 baht left in her bank account and it would be used to help pay for Pornchai's funeral.

Pornchai was not recognised by Guinness World Records as the world's tallest-living man, a title that belongs to Sultan Kosen, a 32-year-old Turkish man who stands at 251 centimetres.

However, he was too sick at the time to undergo the verification process.

The share price of Central Retail Corporation Plc ends in the red on the first day of trading Thailand's largest-ever IPO.