A 69-year-old Swedish man was found dead in a resort room at a popular beach in Rayong’s Muang district on Thursday.

The man, whose name was withheld, was found dead on the floor near the bathroom with one leg propped on a chair at Ban Suay Thalae Sai resort on Mae Ramphueng-Ban Kon Ao beach in tambon Phae, Pol Lt Jintasak Sukkaew, a duty officer at Phae police station, said.

The discovery of his body was reported to police at about 11am on Thursday.

Police believe he had been dead for at least six hours when found. There were no signs of a struggle in the room.

Staff member Wanida Wanthong, 26, told police the man had stayed in the room on the second floor of the resort since Oct 22. A Thai female friend had escorted him to the resort.

She said the man was friendly and cheerful. His female friend was not there when he died, but had asked resort staff to help take care of him, said Ms Wanida.

She heard a loud noise from his room on Wednesday night, but did not go to check it. When he did not appear downstairs in the morning, she went to his room, but the door was locked. She knocked several times and then used a spare key to enter. She found him lying on the floor and immediately alerted police and the man’s woman friend.

Police suspected he died of a heart attack. A post mortem was planned at the forensic institute in Bangkok to establish the cause of death. Police were informing the Swedish embassy to contact his relatives.

The woman friend broke into tears on seeing his body. She declined to make any comment and did not allow her photograph to be taken. 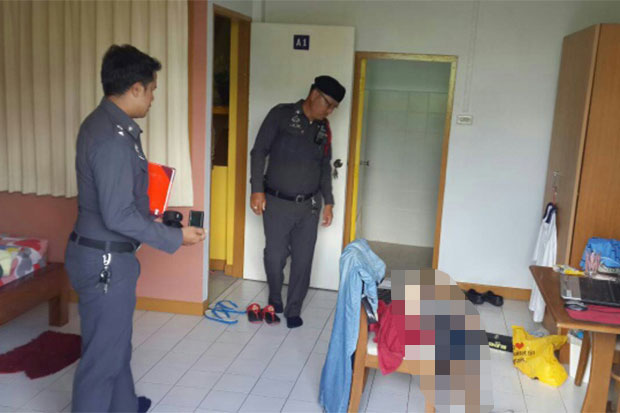 Police inspect the body of the 69-year-old Swedish man found dead inside a room at a seaside resort in Rayong on Thursday. (Photo by Jumphol Nikomruk)