The cabinet has approved a Thai-Chinese cooperation framework for Sino-Thai railways from the Northeast to the Gulf of Thailand. (Photo by Pattarapong Chatpattarasill)

The cabinet on Tuesday approved a framework for Thailand and China's distribution of responsibilities in implementing the Thai section of the transnational railway from southern China to the Gulf of Thailand.

Both countries signed a memorandum of understanding in November last year, but the new cooperation framework makes the plan more concrete, government spokesman Sansern Kaewkamnerd said. The date for signing the document has yet to be set.

The framework concerns two routes of dual standard-gauge tracks. One is from Bangkok to Kaeng Khoi district of Saraburi province and the other from Map Ta Phut town of Rayong province via Kaeng Khoi and Nakhon Ratchasima to Nong Khai province. 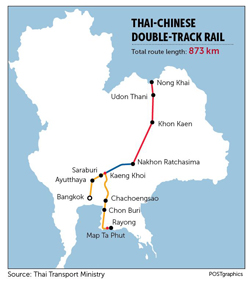 Under the framework, a joint venture will be set up to run the project. China will conduct a feasibility study, design the system, take up high-technology construction including that of tunnels and bridges, and install the railway system.

For the finance, Thailand will allocate a government budget and borrow from local financial institutions while China will arrange a loan from its export-import bank or another source, such as the Asian Infrastructure Investment Bank, on the condition that the interest rate will not exceed that available through local financing.

For railway operation and maintenance, China will take charge in the first three years of service. Between the third and the seventh years, both countries will have close shares and later Thailand will take the responsibility with China being its adviser. China will also train Thai personnel to operate and maintain the system.

The cooperation framework will be valid initially for five years and automatically extended if no termination notice is filed.

Transport Minister Arkhom Termpittayapaisith told the cabinet meeting on Tuesday that the upcoming signing of the framework would show that the project made progress, although the loan interest rate has yet to be set.

The construction of the 873-kilometre-long railway system is expected to start mid next year and take three years.

It will connect to a 417km line from Vientiane to the northern Lao border and a 520km line from the border to Kunming, southern China.

E-marketplace JD Central has announced it will end its operations in Thailand from March 3.

The Bangkok police chief says a Taiwanese actress found with a prohibited vapouriser should not have been released, and confirms checkpoint police are under investigation for alleged extortion.