The regime tries to prevent backlash from the Rajabhakti probe.

Flashback: On the first anniversary of the coup last May, hand-picked army commander Gen Udomdej Sitabutr (right) placed floral offerings before replicas of the statues of the seven great kings, models for Rajabhakti Park. (Photo by Apichart Jinakul)

The military regime is rushing into "damage-control mode" to protect key member Gen Udomdej Sitabutr from becoming embroiled in the scandal surrounding the construction of Rajabhakti Park.

While the Royal Thai Army is probing alleged irregularities in the one-billion-baht project, a military source said the National Council for Peace and Order (NCPO) is struggling to extricate Gen Udomdej, deputy defence minister and NCPO member, from the scam as well as prevent any backlash against it over the issue.

The NCPO, particularly Prime Minister Gen Prayut Chan-o-cha, made it clear after seizing power in May last year that one of its priorities is to tackle corruption. Therefore, it cannot afford to let its reputation be tainted by graft itself, the source said.

"The NCPO must save Gen Udomdej. He unwittingly gave his subordinates all the responsibility [to run the project] without realising the impacts that could follow. The scandal could also have repercussions on the NCPO as a whole," according to the source.

The source said that while the army has launched an internal investigation into alleged irregularities, it needs to tread carefully to minimise damage to the NCPO's public image. (Story continues below) 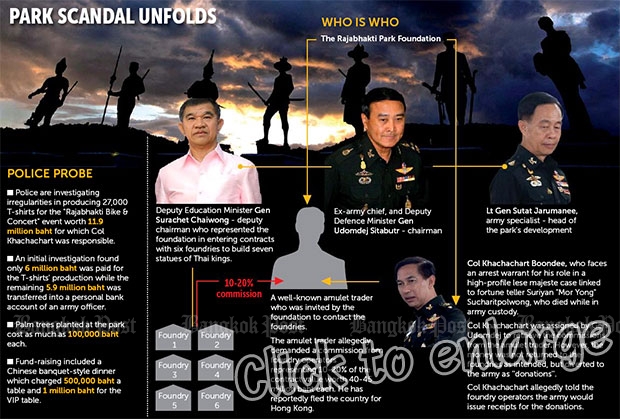 Army commander Gen Theerachai Nakvanich has appointed Gen Veerun Chantasatkosol, who is chairman of the army's advisory board, to lead the investigation.

The Rajabhakti Park construction project was initiated by the army under the leadership of Gen Udomdej who was the army chief at the time.

The park -- which has seven giant statues of former kings and is located on army land in Prachuap Khiri Khan's Hua Hin -- has come under intense public scrutiny after accusations of corruption surfaced. The Central Investigation Bureau has launched an investigation into alleged irregularities in project.

Meanwhile, a police source revealed that the police probe has found alleged irregularities in the purchase of T-shirts for the Rajabhakti Bike & Concert event held on Sept 12 in Prachuap Khiri Khan's Hua Hin district.

The source said orders were placed for a total of 27,000 T-shirts worth more than 11.9 million baht.

Col Khachachart Boondee of the 3rd Army Region, who faces an arrest warrant for his role in Suriyan "Mor Yong" Sucharitpolwong's alleged lese majeste network and is also allegedly linked to the park project, was responsible for buying the shirts, the source said.

The source said investigators had found that only 6 million baht was paid to the suppliers of the shirts, while the remaining 5.9 million was allegedly transferred to the bank account of the colonel.

Police are examining the money trail to see whether anyone else was involved, the source said.

Gen Udomdej retired as army chief on Sept 30 this year, but remains in the government as deputy defence minister, and an NCPO member.

He initiated the project by setting up the Rajabhakti Park Foundation to manage the park, with donations from private businesses and the public to finance the project.

The source said Gen Udomdej had wished to relinquish the post of deputy defence minister after he resigned as army chief, though Gen Prawit wanted him to stay on.

However, if he resigns in the face of the Rajabhakti scandal, it would effectively mean admitting to alleged wrongdoing, although he had no involvement, the source said.

The scandal followed the crackdown on the alleged high-profile lese majeste network led by Suriyan who recently died while in custody.

Col Khachachart, who has been dismissed from the army, is said to have fled across the border into Myanmar via Tak's Mae Sot district early this month.

Gen Udomdej earlier admitted that a well-known amulet trader had cited "people in authority" to demand commission fees from statue foundries, but he sent an army officer to ask him to return the money to the foundry owners. A source said the officer was actually Col Khachachart, who was Gen Udomdej's close aide.

Foundry operators reportedly told police the trader demanded 10-20% commissions for each statue contract, valued at more than 40 million baht each.

Gen Udomdej's interview on the matter had caused him and the NCPO to become the target of criticism by anti-government and anti-coup elements, questioning why the army did not take any legal action despite the fact that it found commissions being demanded from foundries' operators.

"The interview by Gen Udomdej was suicidal for himself," the source said.

Vying for supervision of Rajabhakti Park also seems to be a thorny issue between Gen Udomdej and Gen Theerachai, another source from the army said.

Gen Udomdej insisted the park must be fully completed before its handover to the current army chief. Construction of a museum and other facilities are still ongoing, the source said.

The source said Gen Theerachai has agreed to manage Rajabhakti Park because it is located on army land, but he will not assume chairmanship of the foundation which is responsible for the park's construction until the irregularities are clarified.

Regarding the army's probe into the project, the source said Gen Udomdej is maintaining his innocence and was ready to face scrutiny.

The transfer of government critic Dr Supat Hasuwannakit to a southern border town has sparked controversy, with some alleging it is being done due to his outspoken role with the Rural Doctor Society.