A bird's-eye view of the Klong Dan wastewater project, considered to be the biggest, most corrupt boondoggle in the country's history. (Photo by Pattarapong Chatpattarasill).

Officials found to be involved with the scandal-hit Klong Dan waste water treatment plant in Samut Prakan will be held responsible for huge fees incurred by the government for breach of contract.

They will have to cover the nine-billion-baht penalty which the government has been ordered to pay to the contractor, said Ministry of Natural Resources and Environment permanent secretary Kasemsun Chinnavaso.

Mr Kasemsun said Wednesday that a committee has been set up to investigate officials who were involved in the corruption saga.

The team will use the Supreme Administrative Court's verdict as a guideline to find people to take responsibility for damages to the state.

Officials who are found guilty will be forced to pay compensation to the government, he said, explaining the amount of money will be associated with their position in the state service hierarchy.

The higher-ranking officials will be responsible for higher amounts of compensation. 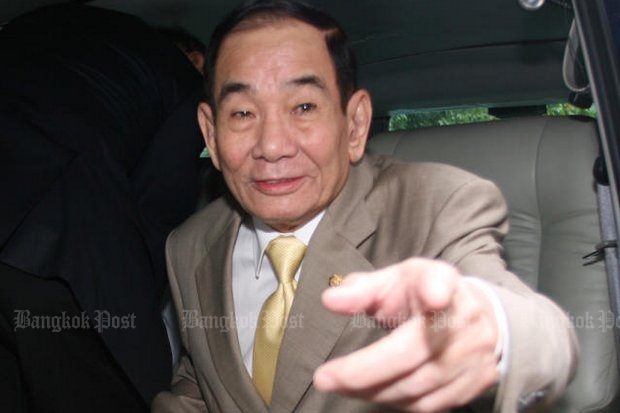 Convicted of corruption during the Klong Dan project construction, Vatana Asavahame has fled abroad and for now is beyond the law.

"If they are found guilty, they must return money to the government. If they have died, their children must take responsibility," he said.

Many committees have dealt with the long-running legal saga over the years. Little progress has been made in holding the guilty to account, even though the names of the wrongdoers have been revealed.

A source at the Department of Pollution Control said the new committee, chaired by the ministry's inspector Worasat Apaipong, will focus on officials who were involved with an order to cancel the contract with the NVPSKG consortium.

The Supreme Administrative Court cited the ministry's cancellation of that contract when it found in favour of the consortium last year.

The court agreed with the arbitrator's conclusion that the department needed to pay the construction costs as the project was nearly completed.

The ministry's move is in line with the cabinet's resolution on Tuesday that approved a sum of 9.8 billion baht to be paid to the consortium.

The first lot of 3.2 billion baht and US$21.7 million will be paid by Saturday and the remainder next year.

Meanwhile, the Wastewater Management Authority and the department will look into whether the plant, which was never opened, can still be used.

Mr Kasemsun said the agencies would also invite the public to have a say on the matter.

Many locals opposed the plant on environmental grounds.

The Wastewater Management Authority will submit a request for 285 million baht for the study. Academics from Kasetsart University will help with that study by reviewing the plant's condition.

Meanwhile, local activist Dawan Chantarahassadi said she was opposed to the government compensating the consortium, saying the ministry should investigate ways to reduce further damages to the state before making any payments.

She claimed the NVPSKG concealed certain information from the department before it signed the contract.