Irishman bent on suicide jumps to death at Suvarnabhumi

A man who jumped from the arrivals level at Suvarnabhumi airport Thursday night lies unconscious on the ground level. He later died. (Photo by Sutthiwit Chayutworakan)

A down-on-his-luck Irishman died after successfully jumping from the second level of the Suvarnabhumi airport passenger terminal late Thursday after trying to commit suicide earlier that day.

The 35-year-old man from Northern Ireland, whose name is being withheld pending notification of relatives, was found lying unconscious on the ground floor of the Passenger Terminal Building after leaping from Gate 3 of the arrivals hall. He was rushed to a hospital, but died there shortly later.

Airport security officers told police that they saw the foreign tourist trying to jump from the departures level at Gate 8 around 1.30pm on Thursday, but was stopped. Airport staffers took him to the Tourist Police Office in the compound to calm down.

The man initially refused to disclose the problem that drove him to attempt suicide. Police asked for contact numbers of his relatives, but he declined to provide them, Thai media reported on Friday.

Escorted for smoke breaks every 10 minutes, the man finally revealed he didn't have any money to pay for a 22,000-baht air ticket back to Britain.

Police tried to assist by contacting the UK embassy and his relatives. During the fund-raising efforts, he was quarantined as he continued to show symptoms of stress and anxiety.

Around midnight, the man told officers that he wanted another cigarette. While outside, he bolted to the elevated bridge between gates 3 and 4 and jumped about 15 meters to the ground.

Authorities were contacting the embassy to notify his relatives. 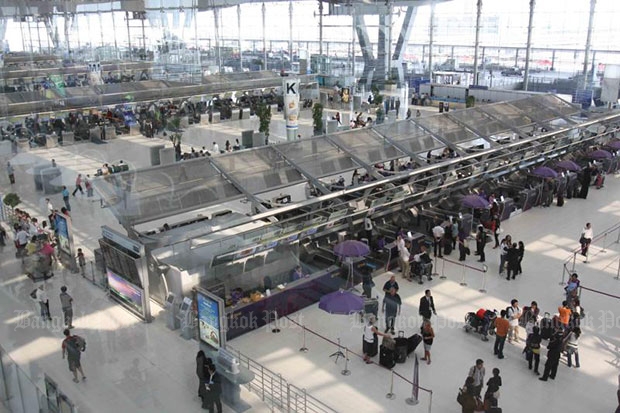