Aussie biker with long criminal past kidnapped in Pattaya

CHON BURI – A former Australian motorcycle gang member arrested six years ago for drug trafficking, obstruction of justice, and involvement in the theft of 5 million baht from a Melbourne casino was abducted at gunpoint from his Pattaya home early Monday.

Former Hells Angels biker Wayne Rodney Schneider, 38, was beaten unconscious and driven away in the back of a black Toyota Vigo pickup truck around 5am from his home in the Jomtien Park Villas housing estate on Thepprasit Soi 17 in tambon Nong Prue of Bang Lamung district. Blood and bullet casings were found at the scene.

Police believe the leader of the five-member gang of masked kidnappers that took him was a fellow Australian, identified as Antonio Bagnato, local Pattaya media reported Monday night. The suspect has gone missing, police said.

Amad Malkoun, 52, an Australian passport holder of Lebanese origin who is Mr Schneider's friend, said the kidnap victim invited him to stay at his rented home on Saturday when he met Antonio Bagnato, a 26-year-old Australian, who appeared very close to Mr Schneider. 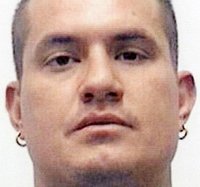 Schneider: Beaten and driven away. (Photo from The Daily Telegraph, Sydney)

They three went out for drinks on Sunday night but he returned home early, feeling ill. Shortly after, he saw the pair arrive home and continue drinking. He talked to them for a while and went to bed and only learned from police that his friend had been kidnapped afer he awoke today.

A security guard, who witnessed the abduction, identified Mr Bagnato as one of the five abductors.

The French caretaker of the house, identified by local Thai media as Patrick Christian Paul Duvivier, said Mr Schneider had paid 130,000 baht in advance for six months of rent and had lived there about a month.

He said the tenant was close and often hung around with Mr Bagnato and three other men, two of whom he identified only as Frank and Shane.

Security guards at the housing development said all the assailants appeared to be foreigners, although they were wearing scarves covering their faces.

Two security guards stationed at the entry to the development, Suphan Pitakwong, 34, and Chian Kradao, 38, told police they heard a man cry for help and went to investigate. They saw five men, all wearing black masks, assaulting a foreign man.

One of the gang members threatened the guards with a pistol, indicating they were not to follow.

The assailants then fled. Police are now reviewing CCTV cameras along the getaway route.

Friends interviewed by Thai media today said they knew of no motive for the kidnapping. But Mr Schneider has a long and turbulent history in his home country where he faced numerous charges as recently as 2012.

It is unknown how, or if, those legal cases were concluded or whether Mr Schneider was living in Thailand as a wanted fugitive.

In July 2009, he was charged with six counts of possessing restricted substances and two counts of dealing with property suspected of being the proceeds of crime after police seized A$205,000 baht in casino chips from his vehicle, according to the Courier-Mail newspaper

Mr Schneider claimed he won the chips in a "high rollers" room at the Crown Casino, but the gambling resort reported the chips as lost.

Mr Schneider and the bikers were under investigation for years by an organised-crime task force in New South Wales investigating shootings and drug trafficking by bike gangs.

Later in 2009, Sydney prosecutors charged him with trafficking large amounts of 1,4-Butanediol, which is known by recreational drug users as "One Comma Four", "Liquid Fantasy", "One Four Bee" or "One Four B-D-O"..

Australian media has no reports of any of those cases ever being concluded and no mention at all of Mr Schneider after 2012.

It's unknown how long he has been residing in Pattaya, a popular hideout for international fugitives.