Government presses on with GMO bill

The government has insisted on pressing ahead with the enactment of a controversial bill regulating genetically modified organisms (GMOs) amid mounting opposition.

However, it promised Wednesday to allow representatives of farmers and activists to air their opinions and share information with the National Legislative Assembly (NLA) during the bill's vetting.

The move came after networks of farmers who believe they will be affected gathered in 46 provinces across the country to oppose the biosafety bill which received cabinet approval on Nov 24.

In Bangkok, a group of around 200 representatives from 115 networks of farmers, along with environmental, health and consumer protection activists, gathered yesterday in front of Government House to oppose the draft legislation. They demanded the government put the bill on hold. 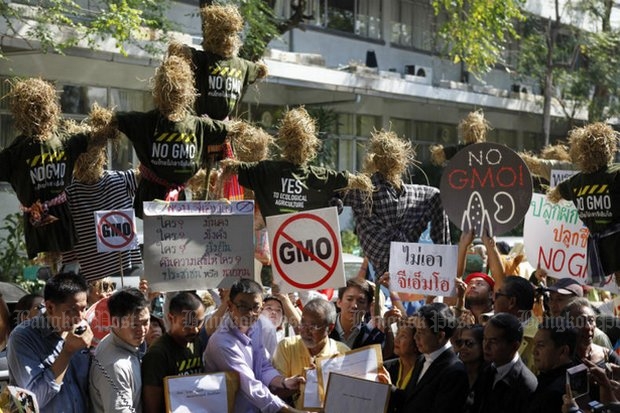 The group also called on the government to set up a joint committee with representatives of farmers and NGOs participating to review the bill before it is forwarded to the NLA.

Government spokesman Sansern Kaewkamnerd met with the demonstrators and explained to them that the government is ready to listen to all opinions concerning the bill, but it is impossible to put the legislation on hold. It must continue but the government is still open for debate regarding its pros and cons, he said.

"We have to admit that GM products have been marketed in the country without laws to regulate them. A law is needed to control any possible damage and determine who must be responsible for such damage," he said.

"I am certain the NLA members will not pass the bill if they find too many weak points. As this is an important issue, I believe the NLA will set up a committee to consider this issue in particular and they will allow stakeholders' representatives to air their opinions and share information on the matter," Maj Gen Sansern said.

"I don't understand why state agencies failed to explain this issue to the public, as this has resulted in mounting opposition to it," he said.

Three controversial bills -- the biosafety and two petroleum-related bills -- will not be immediately forwarded to the NLA. Some sections will be adjusted to ease the concerns of opponents.

"I confirm that I never thought we wanted GMOs in Thailand," Gen Prayut said.

However, the government's message has not convinced the GMO-regulating bill protesters.

Witoon Lienchamroon, director of BioThai, said he would give the government some time to come up with a clear answer on how it will proceed with the bill.

However, he said speeches from the government spokesman do not represent an official message from the regime.

He also insisted that the government should suspend the bill from being forwarded to the NLA and set up a joint committee to rewrite it.

The joint committee must include all stakeholders, especially farmers who are directly impacted by the bill, Mr Witoon said.

Stronger action by the networks will be organised if the government ignores their calls, he said.

Suree Yodprachong, chairwoman of Thai Tapioca Starch Association, said the government should listen to the opinions of the bill's opponents' as GM contamination of the environment will definitely have a negative impact on 530,000 cassava farmer families nationwide and the tapioca starch business that generate revenues of more than 70 billion baht and 140 billion baht each year respectively.

She said all the major starch markets in China, Europe and the United States also oppose GM crops.

"If GM crops are allowed to be commercially planted, which is possible under the controversial bill, then there is no guarantee that GM contamination will not be released into the environment and that would cause severe damage," she said.

Ms Suree said orders from overseas markets would fall substantially as had happened with canned fruit from Thailand when GM papaya was found in the past.

Meanwhile, Kasemsun Chinnavaso, the Natural Resources and Environment Ministry's permanent secretary, said yesterday the country needs to have the biosafety law as currently there is no law controlling and supervising the research and study of GM crops, meaning the country is at risk of spreading GM contamination into the environment. 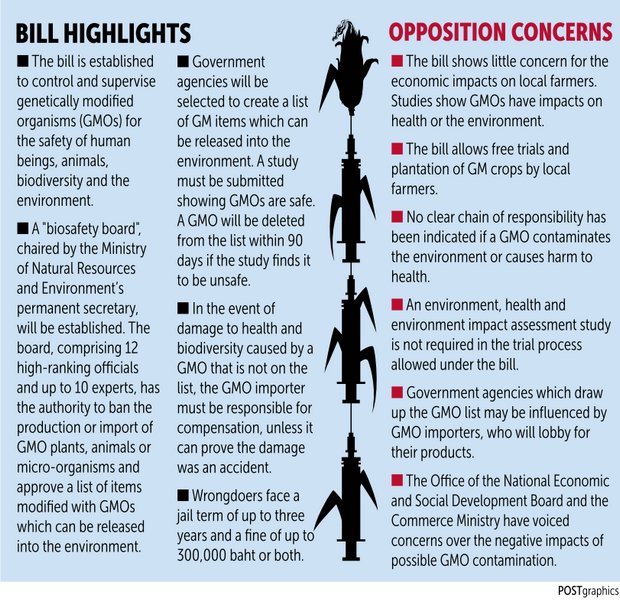