Across country, around world, Thais 'Bike for Dad'
Thailand
General

Across country, around world, Thais 'Bike for Dad'

His Royal Highness Crown Prince Maha Vajiralongkorn kicks off the 'Bike for Dad' event at the Royal Plaza on Friday to mark His Majesty the King's 88th birthday. (Photo by Pattanapong Hirunard)

From the capital to the insurgency-riddled southern provinces, people from all walks of life pedalled their bicycles on Friday to honour His Majesty the King and “Bike for Dad”.

His Royal Highness Crown Prince Maha Vajiralongkorn led cyclists in the 29-kilometre ride, which started at the Royal Plaza around 3.45pm and travelled a loop through many areas of Bangkok, including across the Chao Phraya River into Thon Buri.

Well-wishers thronged roadsides where the Crown Prince led the peloton and chanted "long live the King". HRH Princess Bajrakitiyabha and HRH Princess Sirivannavari Nariratana joined him in the event eagerly awaited by Thais in both this country and in 66 cities in 52 countries around the world. 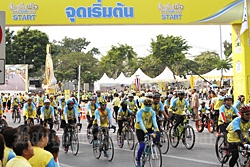 Cyclists join the 'Bike for Dad' activity on Friday. (Photo by Pattanapong Hirunard)

In Bangkok alone, 99,999 people had registered on the official "Bike for Dad" website, but the actual number of riders was higher, including those who could register.

The event drew hundreds of thousands of people or more across the country. About 9,800 Thais living in other nations also registered to bicycle in their country of residence, according to the Foreign Ministry.

Mirror rides were held in each of the 77 provinces at the same time, except for Trat, where about 400 cyclists began pedalling in the morning for 129 kilometres starting at Muang district to Khlong Yai district and back in what was the longest ride of the day.

Pattani, Yala and Narathiwat provinces in the Far South also organised events, including a village in Khok Pho district in Pattani which is deemed a "red zone" for violence by security authorities.

Adae Kangeng, the Ban Dupa village chief, said he mobilised 300 villagers of all ages, from a five-year-old boy to a 75-year-old man, to pedal to honour His Majesty, show that the village was safe, and tell the country that people lived peacefully there despite concerns by security authorities that it was dangerous due to the ongoing insurgency.

In Phitsanulok, Wattana 'Nong Time' Kham-in had an opportunity to use his modified bicycle bestowed by the Crown Prince. The Crown Prince was impressed with the 11-year-old boy's determination in shrugging off his physical disability by riding a bike to honour Her Majesty the Queen in the August "Bike for Mom" event. The boy had practised with his new bike for months before "Bike for Dad" arrived.

The "Bike for Mom" ride, also led by the Crown Prince, brought together 294,863 riders, the biggest such parade ever, but the record could be matched or broken by today's event.