Thirteen ethnic Chinese tourists from Malaysia and a Thai tour guide were killed and 12 of their companions injured, two of them seriously, when a bus they travelled in ran off the road in Chiang Mai Sunday.

Police said the deadly crash occurred with a "rogue driver" at the wheel, who was trying to flee responsibility of another incident minutes earlier when he had collided with a pickup truck and failed to stop at the scene.

The crash happened on the Chiang Mai-Chiang Rai Highway (Highway No.118) in Ban Pan Fan village of Pa Miang sub-district in Doi Saket district about 11.30am, said Chatchai Promlert, director-general of the Department of Disaster Prevention and Mitigation.

The Chiang Mai-registered bus with the licence number 30-0485 was heading from Chiang Rai province to Chiang Mai.

The driver of the bus, identified as Somporn Bualuang, 58, had reportedly hit a pickup truck in the Mae Khajan area of Chiang Rai but failed to stop.

The pickup gave chase, causing the bus driver to accelerate, break through two checkpoints and lose control.The bus then hit a sedan, careered off a roadside power pole, plunged off the road and overturned.

The driver is among the 12 people injured, two of whom are in critical condition.

He is in police custody at Doi Saket Hospital.

Of the 14 killed - including the 34-year-old Thai tour guide, Pattara Promjaijom - 11 died at the scene. The others were pronounced dead at the hospital.

Families of the dead will receive 1.6 million baht each from insurance firms and assistance from the Tourism and Sports Ministry, according to Chiang Mai governor Pawin Chamniprasarn.

The government will also pay up to 50,000 baht each in treatment for the injured.

Chiang Mai land transport chief Charnchai Keelapaeng said that he plans to revoke the licence of the driver in Sunday’s fatal bus crash while police continue to investigate. 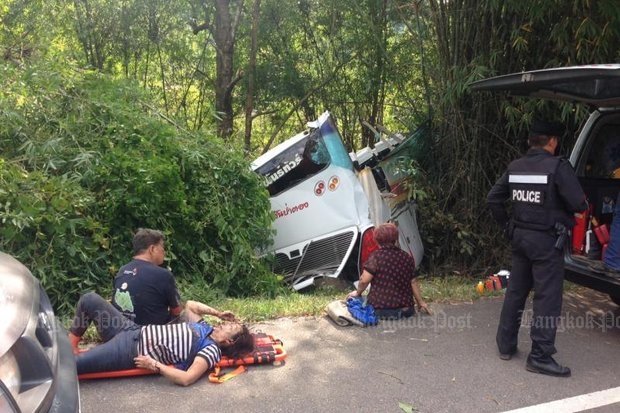 Injured Malaysians wait at the scene for help after the violent crash of their tourist bus.

Twelve Malaysian Chinese tourists were killed and 11 of their tour companions injured as their bus, steered by a rogue driver who was fleeing from an earlier accident, ran off the road in Chiang Mai province on Sunday.

The incident happened on Chiang Mai-Chiang Rai Highway (Highway No.118) in Ban Pan Fan village of Pa Miang sub-district in Doi Saket at about 11.30pm, said Chatchai Promlert, director-general of the Department of Disaster Prevention and Mitigation.

The bus registered in Chiang Mai with the licence plate number 30-0485 was heading from Chiang Rai province to Chiang Mai. It hit a passenger car and then a power pole before plunging at speed off the road.

The Thai driver of the bus had reportedly hit another vehicle in Mae Khajan area of Chiang Rai and tried to escape. The road chase by the other vehicle caused the bus driver to speed up and lose control, creating the tragedy for the Malaysian Chinese tourists who had just arrived from Malaysia.

The bus driver was injured and is in police custody at Doi Saket Hospital. 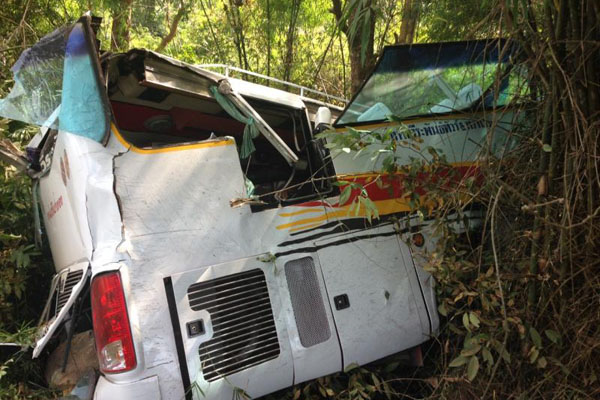 The wreckage of the ill-fated tour bus at the scene of the accident near Chiang Mai-Chiang Rai road, Chiang Mai province, on Sunday. (Photo by Cheewin Sattha)