Free labour market catches out those who can't communicate.

The launch of the Asean Community (AC) on Thursday, and the integration of regional economies through the free movement of skilled labour in an English-mediated environment, has prompted fears among Thais, who worry their English competency is not up to par to compete in the labour market. 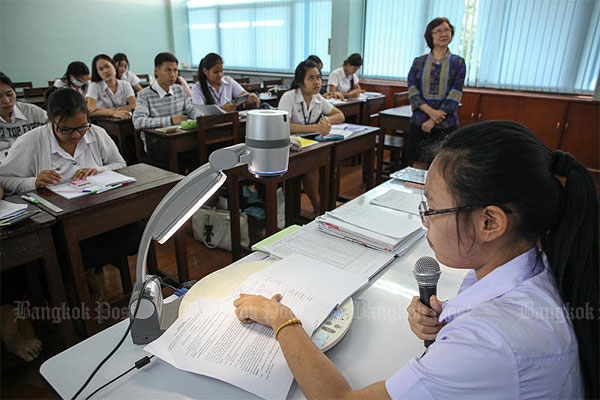 An English language classroom at Chetupon Commercial College, which is preparing students for the Asean Economic Community. (Photo by Panupong Changchai)

Thais' poor grasp of the English language has generated concern among students, teachers and policy-makers, and comes despite the vast new employment opportunities promised by the Asean Economic Community (AEC).

The English abilities of Thai people are ranked at 14th out of 16 countries in Asia and 62nd out of 70 countries worldwide.

Tothsaporn Thongdee, 20, a second-year higher vocational student at the Eastern Technological College in Chon Buri said he worries about whether his English is strong enough for his future career as an accountant, a profession that is granted free movement under the AEC.

"I think I'm good at accounting but I'm not sure I can find a job after graduation since my English is not good," he said.

Under the Asean Mutual Recognition Arrangements, professionals in eight fields are allowed free movement throughout the region.

"Workers from other countries can come to work here. Competition will get fiercer for those who are not well-prepared," said Kanjana Kiewpimai, 16, a student enrolled in the English Programme of Chetupon Commercial College's Hotel Management course.

Prime Minister Prayut Chan-o-cha yesterday urged Thais to pay more attention to improving their capacity to communicate in English, which he also considers a weak point for Thais in the era of the AC.

He called on people to boost their skills to compete in the AC labour market, as they will face tougher competition from people from neighbouring countries, according to government spokesman Sansern Kaewkamnerd.

By contrast to the lack of confidence expressed by political leaders, the minority of students who study under English Programmes (EP) or mini-English Programmes introduced by the Office of Vocational Education Commission (Ovec) in 2012, and do speak well, are optimistic about the opportunities that will open up to them in the AEC.

Pairtiwa Rampool, 16, a Hotel Management student at Chetupon Commercial College, anticipates much travel in her future.

"After graduation, I plan to study further in Switzerland, then I will consider applying for jobs outside my country as the AEC will open doors for me," she said.

"I would like to work in Singapore because the salary over there is better than here in Thailand."

The EP is part of the government's six-point strategy for the country to thrive in the AC, which also includes creating public awareness of Asean, improving education, sharpening labour proficiency, boosting technology and forming more networks with neighbouring countries.

“Following the launch of the AEC, the job market will become more competitive. People with higher skills in English will be at an advantage, so we try to prepare them for the AEC,” said Amornrat Kreetatorn, 54, the head of the English programme at Chetupon Commercial College.

While Thai students are relatively competitive in terms of vocational skills, the lack of English proficiency is a major disadvantage, said Ms Amornrat.

"I am seeing an influx of skilled workers from countries like the Philippines doing jobs that require English-speaking employees in Thailand. Our students need to be aware that workers with stronger English skills will have the cutting edge," she said.

Meanwhile, Wanich Uamsri, Ovec's deputy secretary-general, said the college is just one example of how Thailand is preparing itself to ensure Thai workers do not fall behind in an integrated market that promises a free flow of labour.

He attributes the low English proficiency among most Thai vocational students to the traditionally prescriptive approach to education, which he says hinders language learning.

The influence of Thai culture and low motivation among students to learn a foreign language also play a part, he added.

"Thai students are good workers, but they still lack language abilities, which will limit their career opportunities," he said.

Meanwhile, Ovec has introduced an urgent plan to improve the English skills of both students and teachers, including the publication of small books with 1,000 often-used English vocabulary words for the vocational sector and a one-month "train-the-trainer" programme for vocational teachers in the first two months of this year.

"We are not expecting our teachers and students to become experts in just a short period of time, but we want to boost their confidence in using English," Mr Wanich said.

The possible partnership deals between state-run National Telecom (NT) and the two major private telecom operators have definitely been scrapped.

The prime minister has asked the Transport Ministry to quickly organise hearings to gauge the public's opinion on the commercial development of the Hua Lamphong station.