Police Tuesday were investigating whether hackers who took over several police websites Tuesday acted in response to the Koh Tao murders court decision that has been widely protested in Myanmar.

At least five sites had their home pages replaced with a black-and-white message saying "Failed Law, We want Justice", an apparent reference to the death sentence dispensed Dec 24 to two Myanmar men convicted of murdering two British backpackers on Koh Tao in September, 2014.

"They just inconvenienced us, but didn't do any harm or steal any information," Pol Gen Dechnarong said. 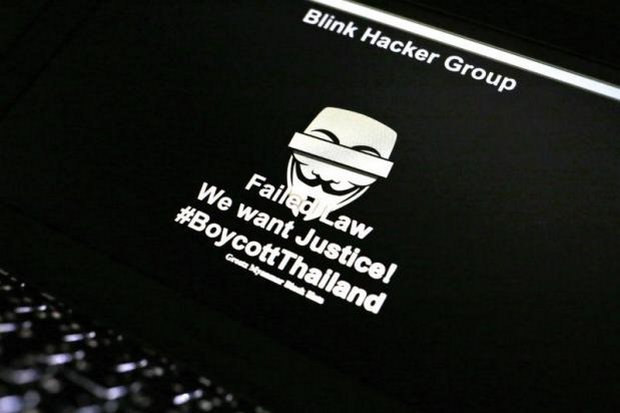 Hackers, believed to be from a group known as "Blink Hacker Group," replaced the home pages of several police websites with this screen. (AP photo)

But many others were inaccessible and the international group Anonymous claimed that 14 sites were attacked successfully.

"I received an initial report that the hackers are from another country," Pol Gen Dejnarong Suthicharnbuncha claimed. When asked if he meant they were from Myanmar and whether the hack was in response to the Koh Tao judgment, he said, "It's possible. We are investigating."

The cyberattack included home pages of the websites being replaced by one by the "Blink Hacker Group". It came after the Anonymous hacker group released a 40-minute video on Sunday accusing Thai police of using the two Myanmar migrant workers as scapegoats in the Koh Tao case.

"Police now are investigating who is responsible for this cybercrime. We are still uncertain whether it was done within the country or from abroad," Police Maj Gen Supasate Chokchai, a police commander from the Technology Crime Suppression Division, told Kyodo news agency.

A black screen showed a white mask and blanked-out eyes and "#BoycottThailand". It also mentioned a group calling itself the "Blink Hacker Group"and made reference to Myanmar with a line in tiny print that said, "Greetz Myanmar Black Hats."

"They're not good enough to hack into our system and steal any of our data," police spokesman Pol Gen Dechnarong told Reuters.

By 7.20pm Tuesday, the Metropolitan Police website was only partially restored, still showing a movie website template around police news and the the Police Clearance Certificate Centre was still showing database errors. The Phichit Police Office and Office of Communication and Communication Technology of the Royal Thai Police were back to normal, although the latter site was missing its identifying logo banner.

On its latest Facebook page, Anonymous said that 14 Thai police websites had been attacked. Of those it listed, nine were inaccessible on Tuesday..

The cyberattack came amidst ongoing protests outside the Thai embassy in Yangon, which announced it would remain closed through Jan 8 due to the demonstrations.

Protesters believe the men were scapegoats and have threatened to boycott Thai goods after a trial that raised many unanswered questions about police conduct in Thailand.