Technicians in Nakhon Si Thammarat prepare to use an electronic scanner to look inside a locked, century-old vault in a former bank building. (Photo by Nutcharee Rakrun)

NAKHON SI THAMMARAT – The mystery surrounding a century-old bank vault in Thung Song district reached an anti-climactic end on Thursday when a scan revealed nothing valuable was locked inside.

The decision to use a tubular device to look inside the former Siam Kammajol Bank building was made after a meeting between Tossaporn Chantaraprawat, the Thung Song district chief, Songchai Wongvacharadamrong, the Thung Song mayor, and officials of the State Railway of Thailand and Siam Commercial Bank, all of whom had a stake in the abandoned structure.

The 108-year-old building had been taken over by the state railway to use as a cargo centre after the bank - a forerunner of Siam Commercial - closed decades ago. 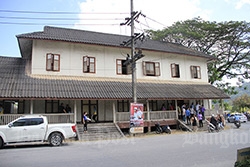 The former Siam Kammajol Bank building in Thung Song district will retain the secret of its vault. (Photo by Nutcharee Rakrun)

All the parties had made several attempts since November to open the vault, but with no success. It was decided that before another try was made, the room would be surveyed electronically. If anything valuable was discovered, new locksmiths would be brought in.

Using the tube, a technician snapped photos of the interior of the safe and discovered it contained only two boxes, one made of wood, the other of iron.

Everyone agreed at that point to give up trying to pick the locks.

The vault was discovered when a Thung Song railway worker was surveying the building in preparation for making the structure a historical museum.

With a large crowd of curious onlookers, safe crackers in late November struggled, but were unable to open the four century-old locks that guarded the safe's mystery without damaging the antique mechanism.

Another attempt, with different specialists, was made a few days later, with the same failed results. Another specialist then said he could open it within three days for 25,000 baht. 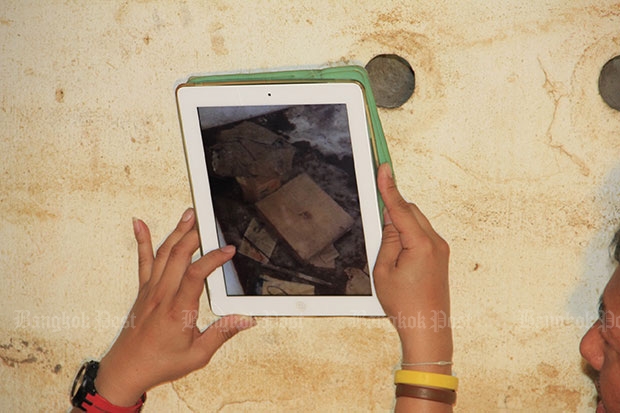 A technician in Nakhon Si Thammarat uses a scanner to look inside a locked, century-old vault in a former bank building. (Photo by Nutcharee Rakrun)

The local municipality put the brakes on the plan as it tried to determine if it was worth the cost and effort.

With the disappointing end to the treasure-hunt mystery, Mr Tossaporn said the town will just leave the vault locked and continue on with its 10 million baht plan to restore the two-storey building, leaving future visitors to wonder what might be inside that iron box in the locked room.