BMTA all set for electric and NGV buses this year

The Bangkok Mass Transit Authority (BMTA) is closing in on a decision to either buy or rent more than 200 electric buses to serve Bangkokians in a fresh bid to avoid further delays in replacing its ageing fleet. 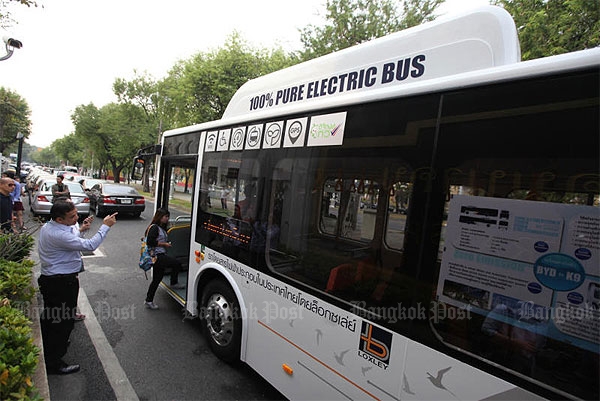 Sparking interest: Officials look at an electric bus that the Bangkok Mass Transit Authority is considering either buying or renting.

With the unexpected setback in acquiring natural gas vehicle (NGV) buses last November, the BMTA, which has been considering a new fleet of NGV buses for nearly a decade, now has little choice but to put its long awaited-plan into action.

Its current plan is to have 3,183 new buses, on both the NGV and electric platforms, and senior authorities expect the plan to be implemented this year.

“I’ve ordered the BMTA to speed up consideration of the purchase or rental of electric buses,’’ deputy Transport Minister Ormsin Chivapruck said in a recent interview.

Between 200 and 300 of them should run on Bangkok streets, but this will only occur if “the BMTA quickly forwards its decision to its board,” he said.

An initial finding shows renting is the more worthwhile investment as the BMTA will bear no burden on maintenance costs, which will be the responsibility of the company which owns the buses, acting BMTA director Pranee Sukrasorn said.

Ms Pranee said she expects her agency should be able to call bids within this year.

The use of electric buses is a policy of Prime Minister Prayut Chan-o-cha as it can help the government save money over the long term, compared with the rising price of fuel for NGVs, also known as compressed natural gas (CNG).

The Loxley Plc-produced buses, which can run 250 kilometres per five-hour battery charge, were tested by the BMTA last year and their performance was satisfactory.

The BMTA is now also correcting its term of reference to acquire 489 NGV buses after its earlier ToR was deemed unlawful, causing the agency to scrap the bidding in November last year, the latest delay in its bus purchase plan.

A new bid is expected in March with a contract signing and bus delivery expected in April and August respectively, Ms Pranee said.