An interprovincial bus rests on the side of the road after a fatal head-on crash with a Toyota sedan in Chaiyaphum province in the early hours of Friday. Two women passengers in the car were killed and 24 other people injured. (Photo by Makkawan Wannakul)

CHAIYAPHUM - Two people were killed and 24 others injured, two seriously, when an interprovincial bus crashed head-on with a car in Muang district in the early hours of Friday.

The accident occurred at Chaiyaphum Ram Hospital intersection on Chaiyaphum-Sikhiu Road around 1.30am on Friday, said police.

The air-conditioned bus, travelling from Bangkok to Loei, collided head-on with a Toyota Avanza with a Nakhon Ratchasima licence plate on the bypass road.

Two women travelling in the car were killed and the driver, identified as Kritsana Khamma, 48, was seriously injured.

The dead women were identified later as Prayont Khamma, 44, and Jong Phuendonkhen, 50. Their bodies were trapped in the wreckage of the vehicle.

Twenty-three passengers on board the bus,11 men and 12 women, were injured, one seriously. All were rushed to a nearby hospital.

Bus driver Pramuan Lampha, 45, told police he tried to avert the crash, but failed as the car was travelling at high speed.

Pol Lt Col Panupong Bunchamroen, a duty officer at Muang police station, said police would examine footage of a closed-circuit television camera before legal action was taken against those involved. 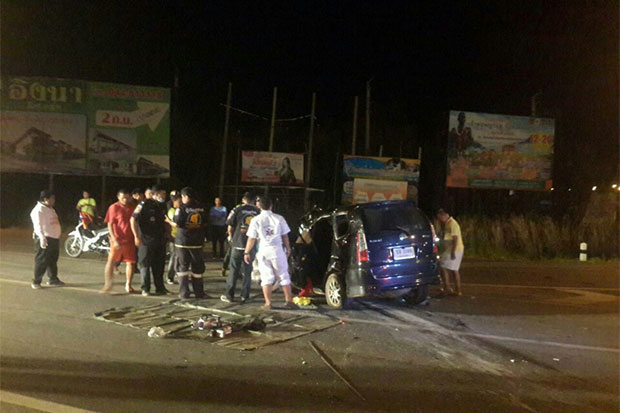 Rescue workers retrieve the bodies of those killed and injured from the car involved in a crash with a bus in Chaiyaphum's Muang district in the early hours of Friday. (Photo by Makkawan Wannakul)

SONGKHLA: One person is missing and eight others were rescued when a speedboat carrying a team of divers capsized off Koh Noo, about one kilometre from Laem Samila beach, in Muang district on Saturday morning.