Environmental activists and community residents have voiced opposition to the orders issued under Section 44 of the interim charter to clear the way for the construction of several power plants stalled by protests. 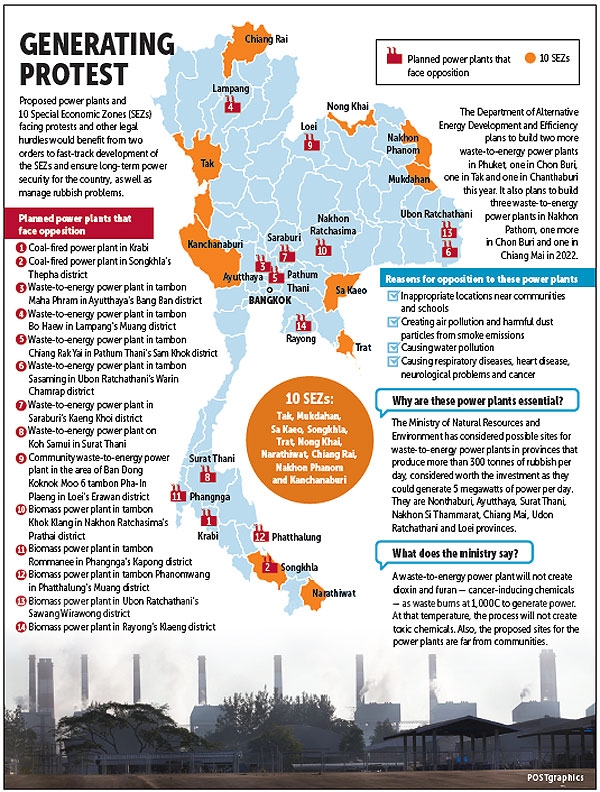 They called on the prime minister to review the order, saying that allowing the projects to go ahead would do more harm than good as they would lead to environmental problems and have a negative impact on people's health.

Order No.4/2016 seeks to remove legal hurdles faced by efforts to boost the country's energy security and improve waste management.

These regulations govern enterprises relating to oil depots, energy factories and related businesses that are part of energy production, transport and distribution of energy, industrial waste treatment and disposal factories, and enterprises related to waste disposal.

According to the order, Thailand is facing energy security and waste management issues which need to be addressed urgently.

The country's demand for energy is constantly growing and energy consumption will likely increase in the future. The energy sector is crucial to propelling the economy. The order also states that the country has been plagued with rubbish problems and that the issue of waste management has become a national priority.

However, efforts to tackle these problems have been hindered by legal hurdles, leading to the use of Section 44 of the interim charter to clear the hurdles.

Surachai Trong-ngam, secretary-general of the EnLAW (Environmental Litigation and Advocacy for the Wants) Foundation, voiced concern that the orders will allow construction of power plants in "green zones" reserved for agricultural purposes under city planning laws. The order will distort the intentions of the laws that stressed the importance of proper land management with the participation of local residents, he said.

He said that the orders will pave the way for the construction of controversial power plant projects, including coal-fired power plants, biomass power plants and waste-to-energy plants. “City planning regulations provide significant protection for agricultural zones," he added.

He said civil society will petition the National Human Rights Commission (NHRC) next week to help find a better solution.

Paranee Sawasdirak, an urban planning expert, will also petition the NHRC next Friday to requesting that the prime minister review the orders.

She said Order No.3/2016 will not lead to any change as the suspension of city planning law enforcement in SEZs is already mentioned in other laws, whereas Order No.4/ 2016 will undermine environmental rights.

"The orders will only speed up the projects. But people and the environment will not be protected," she said, adding that without city planning, investors can misuse the land near the projects.

Dawan Chantarahasadee, senior officer and community adviser of the Ecological Alert and Recover Thailand Foundation, said Order No.4/2016 will push ahead with power plant projects and factories without adequate environmental measures.

The order will allow these projects, once prohibited by city planning regulations, to be established anywhere, she said, adding that many cases have already proven that state agencies have failed to monitor these projects and put local communities at risk.

“We knew the use of Section 44 would be coming one day as city planning forbids any large industry in this area,” said Mr Direk. He said the NCPO’s order was an unfair and unlawful use of power  which will prompt resistance from the people.

"It is good news for us and for all private power producing companies that the government has expressed its intention to unlock the regulations. RATCH is delighted to join the policy," he said.

Wijarn Simachaya, chief of the Pollution Control Department, said all kinds of power plant projects need to follow regulations to protect people's health and the environment.