Work on 'super link' is tipped to begin in September

This year the government is set to offer more convenience to air travellers by starting work on a new rail system under an ambitious plan to link the Suvarnabhumi, Don Mueang and U-Tapao airports together.

Previous governments had similar ideas to upgrade the Airport Rail Link to a "super-link" that includes Don Mueang airpot in Bangkok, Suvarnabhumi airport in Samut Prakan and the navy-owned U-Tapao airport in Rayong, but the plan failed to make progress until the current administration. 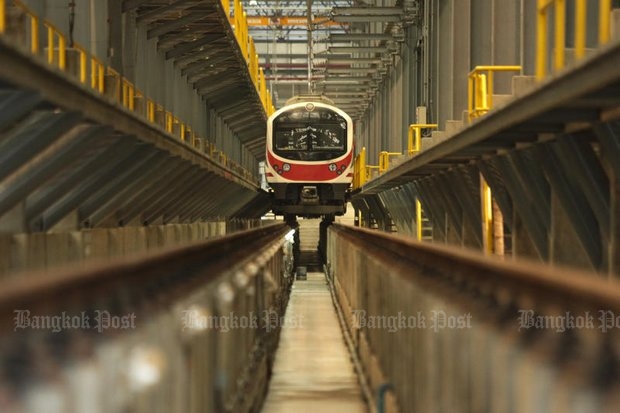 The Prayut Chan-o-cha government ordered a study on a new rail track from Suvarnabhumi airport to U-Tapao airport in the east of the country. Its findings are expected in March this year.

The cabinet will be asked next month to approve construction of the first section of the 31.1-billion baht Phaya Thai-Don Mueang rail route, said Deputy Transport Minister Ormsin Chivapruck.

The line is divided into two sections -- Phaya Thai-Bang Sue, and Bang Sue-Don Mueang airport. A nod from the cabinet will kick-start construction of the 7.8km Phaya Thai-Bang Sue section, a mix of a 4.3km elevated track and a 3.5km underground route, he said.

"Their construction must happen together," Mr Ormsin said, referring to the Airport Rail Link and the Light Red Line projects.

The Phaya Thai-Bang Sue section will most likely materialise first as the Transport Ministry has scheduled action plans. It set September this year as the start of construction and expects this Airport Rail Link extension will open for commercial service in 2020, according to Mr Ormsin.

Phaya Thai serves as the first station of the original Airport Rail Link, the 28.6km line that links Phaya Thai to Suvarnabhumi airport.

The station is considered a good junction for travellers as it connects with the BTS skytrain which carries commuters from inner Bangkok and Thon Buri, located on the west side of the Chao Phraya River.

Under the plan, travellers at this station will be offered one more route taking them to Don Mueang airport where most budget airlines are based. However, this will happen only if the Transport Ministry solves the problem regarding a limited construction area in the 14km Bang Sue-Don Mueang section.

There are three other railway projects which, like the Airport Rail Link, put the Bang Sue station on their construction maps. The three are a section of the Red Line project, connecting Bang Sue and Rangsit, and the Thai-Chinese and Thai-Japanese railway development projects.

The State Railway of Thailand (SRT), which oversees the Airport Rail Link, has limited space for rail route construction from Bang Sue to Ban Phachi in Ayutthaya, so it is impossible to funnel all new railway designs into the same area.

There are initially two solutions to the problem, Mr Ormsin said. First, the Airport Rail Link needs to cancel the Bang Sue-Don Mueang section and have its commuters who want to go to Don Mueang airport take the Red Line at the Bang Sue station to their destination.

The other proposal is to share the track with the Thai-Chinese dual track project, linking Bangkok and Nakhon Ratchasima, he said.

The SRT is considering them both, but the share track option is more likely, he added.

Officials are also working on the Suvarnabhumi-U-Tapao section where the construction cost is estimated to be at least 100 billion baht, Mr Ormsin said.

This project is not a priority at the moment, but will need to be built in the long term, he said.

In addition to the results of the study on this section scheduled for March, SRT governor Wuthichart Kalyanamitra said his agency will also consider another alternative to include the U-Tapao airport station in a planned high-speed rail projection from Bangkok to Pattaya and Rayong.

U-Tapao airport is scheduled to open for commercial service in July this year to help relieve overcrowding at Suvarnabhumi and Don Mueang airports.