The Russian envoy to Thailand says relations with Thailand are at their ''strongest'' point, as the countries prepare to mark their 120th anniversary of diplomatic ties next year.

Speaking to the Bangkok Post, the ambassador of the Russian Federation, Kirill Barsky, said relations between the countries are extensive, ranging from political dialogue, economic cooperation, to security and tourism.

He said the governments have agreed to further strengthen economic bonds, with a series of pacts and high-level visits between the two countries set to inject more life into the trade relationship.

"We will continue to implement agreements reached by our two prime ministers and we have a broad agenda to strengthen the legal basis of our cooperation, taking new measures to expand trade and initiating economic projects to reinvigorate engagement between our business communities,'' Mr Barsky said. 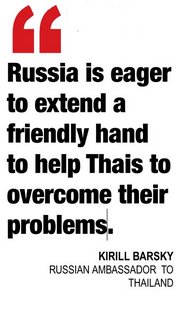 During the visit, Mr Medvedev and Prime Minister Prayut Chan-o-cha pledged to increase trade to $10 billion by this year.

"Our priority areas now are the energy sector, transport, agriculture, science and technology,'' he said.

Thailand and Russia are exploring the possibility of working on ''peaceful'' nuclear energy, in which a memorandum of understanding (MoU) has been signed and working groups convened.

Close ties are also extending to security, amid unconfirmed reports that Thailand plans to buy tanks from Russia.

Mr Barsky said the security dialogue is moving alongside political and economic cooperation as Russia is one of Asean's dialogue partners, playing a key role in maintaining the global security order.

"They will discuss cooperation in combating international terrorism,'' Mr Barsky said, adding the delegation will include officials from the defence ministry, interior ministry, drugs and federal security service (FSB).

Mr Patrushev is a close aide of Russian president Vladimir Putin and chairs the security consulting body which advises the president.

He had worked in the Russian secret service, or KGB, which was once headed by Mr Putin.

Mr Barsky said Russia is ready to work with Asean and its global friends to fight terrorism.

"This is the new threat, let's join hands and fight it,'' he said. 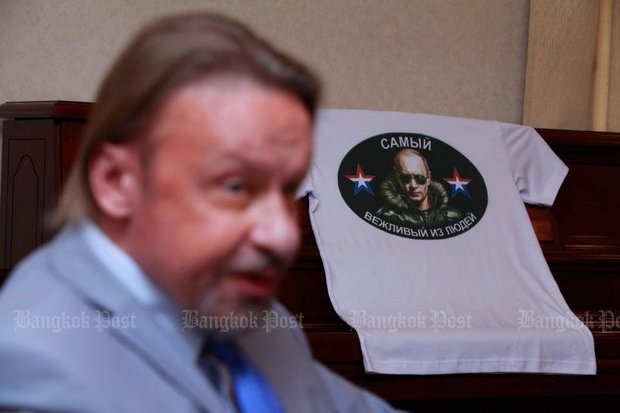 A T-shirt with an image of colourful Russian President Vladimir Putin, former head of the KGB, is displayed in Mr Barsky's embassy office.

Asked whether president Putin will revisit Thailand again to reaffirm ties, Mr Barsky said he expected Gen Prayut will invite Mr Putin when he attends the commemorative Russia-Asean summit, which will be held in Sochi on May 19-20, to mark the 20th anniversary of Asean-Russia relations.

On political engagement since the coup, the envoy said Russia sees political developments in Thailand as its domestic affairs, while still hoping Thailand will restore democracy.

"Russia has never attached strings to its relations with foreign countries. We are committed to the principle of non-interference in the domestic affairs of foreign countries and Thailand is no exception,'' Mr Barsky said.

After the military took control of the country in May 2014, he said, Russia said it backed reconciliation and the restoration of democracy in accordance with constitutional law.

"But Russia strongly believes that what is happening in Thailand is its own affairs and Russia will never interfere,'' he said.

The Putin administration will not abandon or put pressure on its friends. Nevertheless, Russia will use this opportunity to strengthen relations and deepen cooperation without any reluctance.

"Thailand faces many problems these days and Russia, as a friend of Thailand, is eager to extend a friendly hand to help Thais to overcome them,'' he said.

Teachers plead for vaccination against Covid