As the number of illegal entrants rises, the risk of a long-term burden increases

North Korean defectors and refugees have been arriving in Thailand for more than 10 years. This group, part of a total of 175 North Korean nationals in all, were arrested in Bangkok's Huai Khwang district - in 2006. (Photo by Surapol Promsaka na Sakolnakor)

North Korean defectors have become a growing "dilemma" for Thailand which has chosen not to deport them to the communist country for fear they will be persecuted, says head of the Immigration Bureau Pol Lt Gen Nathathorn Prousoontorn.

Thai authorities would rather spend taxpayers' money on humanitarian purposes by looking after them before sending them on to South Korea, he added.

The immigration chief told the Bangkok Post these North Koreans are one of three groups of illegal entrants who could pose a long-term burden on the kingdom if the problem is not resolved now.

The other two groups are Rohingya from Myanmar and Uighur from China. 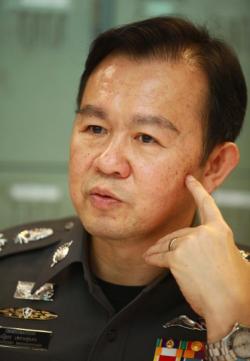 Nathathorn: 'We need to liaise to stop the flow'

The number of North Koreans entering Thailand illegally has increased over the past decade. The current figure is around 2,000 a year, but the number could rise further as a new route via Laos will make make it easier to travel to Thailand, said Pol Lt Gen Nathathorn.

"We need to liaise with Laos more closely to stop the flow," the immigration chief said.

Most North Korean defectors use the China-Laos-Thailand route, he said. They begin by crossing the Tumen River to China where they work for a while to earn some money and travel to southern China. Some choose the "Golden Triangle" route, but most of them prefer the Laos-Thailand route.

From Laos, they can either travel to Chiang Rai, or cross the Mekong River to Nong Khai, Nakhon Phanom and Bung Kan.

Pol Lt Gen Nathathorn recently inspected one of the routes suspected of being used by North Koreans to enter the kingdom.

Using this R3A route, they usually cross the border from Laos in Chiang Rai's Chiang Khong and Chiang Saen districts.

"Once they cross the Mekong River to Thailand, they make a beeline to police to be arrested. After their arrest, South Korean officials come to see them and help them get sent to South Korea," he said.

According to Pol Lt Gen Nathathorn, at least 90 North Koreans are being detained at the immigration office in Bangkok's Suan Phlu area, and the number continues to rise.

"South Korea has sent officials to visit them, bringing them food and giving them job training as their deportations are being processed," he said.

The South Korean embassy in Bangkok declined to comment on the support. But foreign diplomats say the Thai government allows North Koreans illegally entering the country to resettle in South Korea because South Korea's law recognises that North Koreans are also citizens of South Korea. (Story continues below) 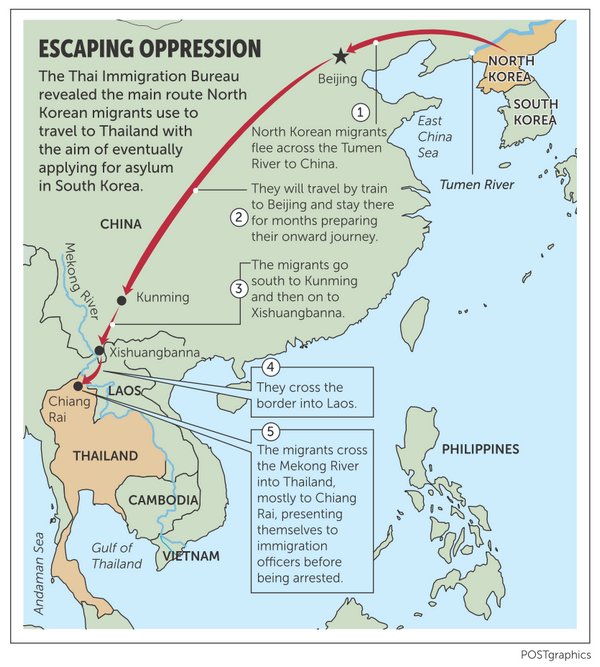 Bangkok also cites the "conveniently blurred geographical distinctions" between the two Koreas in facilitating the transfer and resettlement process, according to a report by then US ambassador to Thailand Eric G John to Washington in 2009 leaked on WikiLeaks.

According to the bureau commissioner, after being deported to South Korea, the North Koreans are taken to Hanawon, a government resettlement centre for North Korean defectors where they learn how to integrate into society and receive job training.

Pol Lt Gen Nathathorn said Thai authorities cannot repatriate them to North Korea under the Immigration Act because it will be in violation of a treaty with the United Nations High Commissioner for Refugees, which is against the deportation of any person if they could face torture or death if they are sent home.

However, the bureau chief said most of the North Koreans are women and children and are not usually involved in illegal activities.

Last November, seven North Koreans, four men and three women aged between 22 and 75, were arrested on the Mekong River in Nong Khai for illegal entry. They were apprehended shortly after disembarking from a long-tailed boat at Ban Phrao pier in tambon Si Kai of Muang district.

According to a 2011 report by UN humanitarian news agency IRIN, just 46 North Korean asylum seekers were reported by Thailand's Immigration Bureau in 2004. The number had jumped to nearly 2,500 in 2010.

Thailand does not recognise the status of refugees and asylum seekers as it has not signed the 1951 Refugee Convention.