The Civil Aviation Authority of Thailand (CAAT) will curb airlines from selling "angel child" doll plane tickets as concerns have grown that they could be used to smuggle drugs.

The dolls have become a recent fad in the country, and there have been many cases of people flying with them.

The National Office of Buddhism, meanwhile, is looking into reports that several Buddhist temples and monks perform rituals for believers who expect the dolls to bring them good fortune and success. Critics warn the practice might not be in line with the monastic code of conduct. Anti-economic crime police seized more than 100 luk thep at various Bangkok locations for alleged tax evasion after vendors were unable to produce custom tax papers. According to police, the dolls were imported from China. (Photo by Apichart Jinakul)

The CAAT's move follows reports that Thai Smile Airways has issued instructions to crew members saying the luk thep (angel child) dolls would need a booked seat under a standardised name of "child's angel", or must otherwise be treated as a piece of carry-on baggage.

Instructions were issued as over 40 passengers have brought dolls on board.

The airline's practice is seen as accommodating passengers who do not want to stow the dolls as carry-on luggage. Some passengers are said to request refreshments for the dolls. 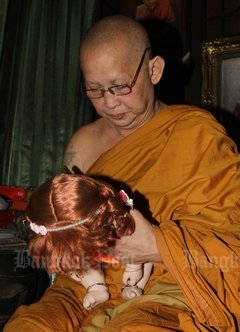 Phra Vinai Tidpanyo performs a rite to instill powers in angel child dolls at Wat Bua Kwan Phra Aram Luang in Nonthaburi. The monk spends 5-10 minutes placing magical geometric shapes on the front and back of the dolls. But while doing this the monk also tells the owners not to be so gullible and only do good deeds. (Photo by Tawatchai Kemgumnerd)

CAAT director Chula Sukmanop said the agency is prepared to issue an announcement Wednesday on how to handle the angel child dolls onboard following a meeting with representatives of airlines and airport authorities over the issue.

"The dolls will be initially classified as luggage, not passengers. Based on international aviation rules, passengers are people. So airlines aren't allowed to sell tickets for dolls and assign a special code to the dolls," he said.

Violators face a one-year prison term and/or a fine of 40,000 baht.

Mr Chula said there are questions concerning the handling of the angel child dolls and representatives from airlines, airports and other related agencies will meet Wednesday to find measures to properly handle them.

Proposed measures may include the zoning of seats to accommodate passengers who do not want to sit next to the dolls. Booking and changing of seats will also be discussed.

He also warned passengers who travel overseas to study customs regulations of their destination country if they want to bring in the dolls. The warning is based on news reports that some grains or seeds are inserted in the dolls for "good luck".

He said the angel child dolls can be seized for inspection given disease control regulations in the destination country.

Transport Minister Arkhom Termpittayapaisith said bringing the dolls onboard is not a violation of air safety regulations, but passengers must ensure it will not compromise flight safety.

He also said the seizure of the doll with 200 speed pills has raised concerns about exploitation and called for strict surveillance in aviation safety.

The seizure of the doll stuffed with speed pills by police in Chiang Mai occurred in the car park of Chiang Mai International Airport on Monday evening, hours after national police chief Pol Gen Chakthip Chaijinda raised concerns that carrying the dolls on flights might be an option for drug traffickers.

A cavity in the doll's chest contained 198 orange and two green methamphetamine pills.

This was the first case in Thailand of drugs being delivered in a doll.

Somkiat Thongsri, director of the Supreme Sangha Council's Secretariat Office, said he has ordered provincial Buddhism offices to investigate a number of reports about monks performing rituals for the dolls.

He said that an investigation is also under way to determine if monks taking part in the ritual violate the monastic code of conduct.

Mr Somkiat also called on Buddhists to be aware of what Buddhism is. 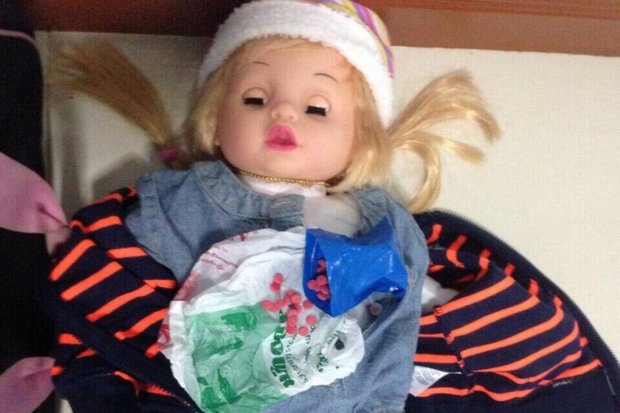