Drought may result in B62bn in damages
Thailand
General

Drought may result in B62bn in damages

The farming sector could face damages totalling up to 62 billion baht if the drought lasts until June, says economist Witsanu Attavanich. 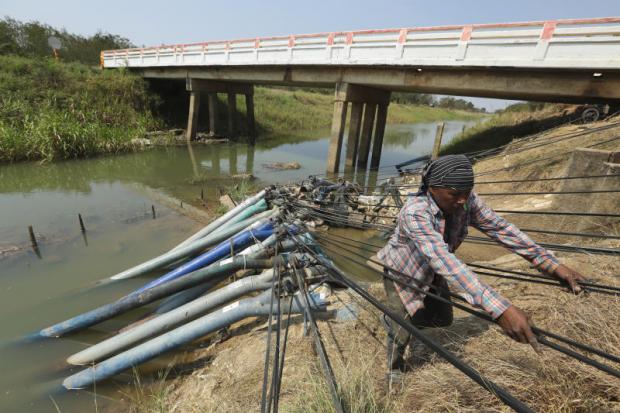 A farmer in Sam Chuk district of Suphan Buri pumps water from Makham Thao-U-thong canal into a paddy field. Military officers have been asking farmers not to do so as they say it will hurt tap water production in nearby Don Chedi district. Patipat Janthong

Mr Witsanu, Kasetsart University's deputy director for applied economics research, said farmers who plant rice in May for this crop year could end up losing their crops if rain is insufficient to feed the sprouts. This is because the rainy season isn't expected to come until June.

He said climate change and extreme weather are to blame for the drought.

According to his research, the cost of damage resulting from climate change to the farming sector could range from 600 billion to 2.5 trillion baht between 2005 and 2045.

According to the Ministry of Agriculture and Cooperatives, 70% of rice plantations in the country are out of irrigation zones. The country's irrigation system only covers 29.6 million rai.

Mr Witsanu voiced concern the government's water saving campaign is not serious enough to garner public support, suggesting that price mechanisms should be exercised to create a more effective water saving campaign for all sectors, including the farming sector as the biggest consumer of water.

"I am certain that charges for water use in the farming sector will happen, which is a powerful way to manage resources in terms of economics. Money will make them aware of the cost of using water. They have a price to pay," he told a seminar at Kasetsart University.

Suthep Noipairoj, chief of the Royal Irrigation Department, insisted that people living in the Chao Phraya River basin will not face water shortages if everything goes to plan, stressing farmers' cooperation is needed to stop draining water from rivers and canals that supply their farms.

Still, he was confident the rainy season will begin in May due to El Niño's weakening influence, adding the department planned to increase water storage levels in dams by not discharging water in the rainy season.

Due to droughts since 2014, water levels in the Bhumibol, Sirikit and Ubolratana dams had been low for three consecutive years.

In addition, Mr Suthep warned that people living in Chiang Mai province might be faced with severe drought due to the level of water in the Mae Ngat dam, which had reached its lowest level since its construction.

There are only 50 million cubic metres of water available for consumption.

Regarding the department's water management plan, he said the department will construct a large reservoir, though he declined to give further details or a location.

He said the department is ready to implement water diversion projects from neighbouring countries as soon as the government develops a clear policy on the issue.

Theerapat Prayurasidhi, the Agriculture and Cooperatives Ministry's permanent secretary, said officers have prepared a plan to respond to the drought, including one asking farmers to plant crops that consume less water, and a scheme to provide occupational training to farmers.