Police question Pritsana Saen-ubon, 22, of Surin, who said she was with Artur Segarra when he saw his face on the TV news on Friday and fled. She said she had no knowledge of his activities. (Photo by Nopparat Kingkaew)

Police have mounted a nationwide manhunt for a Spanish man believed to be the prime suspect in the gruesome murder and dismemberment of his compatriot in Bangkok.

Officers on Saturday questioned a Thai woman who was seen with Artur Segarra Princep in Surin on Friday and claimed he had fled the country after seeing his picture on the TV news.

A motorcycle believed to have been used by Segarra was found abandoned near the Cambodian border but police believe he may still be in Thailand.

Police hope to use the power of social media by posting pictures of Segarra and Pritsana 'Ploi' Saen-ubon on the Line chat application and sharing them with operators of all forms of public transport.

Segarra, 37, is suspected of involvement in a plot to kidnap, extort and kill Spanish businessman David Bernat, either as the mastermind or the actual killer. Body parts later identified as belonging to Bernat were found in the Chao Phraya River this week. 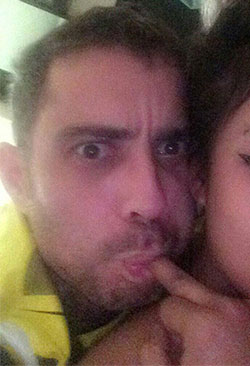 Artur Segarra, 37, was last seen in Surin on Friday with a Thai woman. (Photo by Nopparat Kingkaew)

Pol Lt Gen Sanit said he had issued his order via Line to all city police stations to seek cooperation from their social networks to help track down the suspect or suspects.

He had earlier asked all stations to set up Line chat groups with police volunteers who were drivers of public transport, hired motorcycles, taxis, passenger vans and mini-buses.

The acting police chief said 80% of criminals used public transport to escape after committing a crime. In such cases, he said, he believed social media would reach a lot more people than using television and newspapers to seek public cooperation.

Pol Lt Gen Sanit said police were now gathering evidence before issuing warrants for the arrest of those involved in the killing of the Spanish businessman.

Although investigators do not yet have evidence to bring murder charges against Mr Segarra, they could detain him for immigration violations. His visa expired on Dec 10 and Immigration Police found he had been in and out of the country 13 times.

Bernat, 40 disappeared from his apartment in Klong Toey on Jan 20. Body parts found along the Chao Phraya on Wednesday were later confirmed as his.

Bernat was an adviser to a foreign company and had travelled in and out of Thailand 271 times over the past decade, mostly to Myanmar. His most recent visit was on Jan 19 when he arrived in Bangkok from Tehran, police said.

Forensic experts believe he was killed between Jan 25 and 27.

Police on Saturday questioned Ms Pritsana, who had been with Mr Segarra, at Muang police station in Surin province bordering Cambodia.

The 22-year-old woman admitted the Spaniard had returned to Surin with her by motorcycle and had stayed at her house in tambon Samrong since Jan 31.

She told police that Mr Segarra fled on Friday evening after seeing his face on the television news while they were in a karaoke bar in tambon Tenmee in Muang district.

Upon noticing other people looking at him with suspicion, Mr Segarra immediately left the bar on a motorcycle, said Ms Pritsana.

Staff at the bar alerted police on Saturday morning and this led the officers to take the woman for questioning.

Ms Pritsana said she had known Mr Segarra for more than six months while she worked in Bangkok. She and the man had lived in different apartments, she added.

However, she insisted she did not know anything about his activities and denied any involvement.

While acknowledging the possibility that Segarra might have fled into Cambodia, police believe he might still be hiding in Surin.

The motorcycle ridden by Segarra was found abandoned at the Sombat market, a border market along the Thai-Cambodian border in Kap Choeng district on Saturday morning.

In Kanchanaburi and Chiang Rai, immigration police have been given pictures of Mr Segarra and placed on full alert in case the suspect tries to escape into Myanmar. 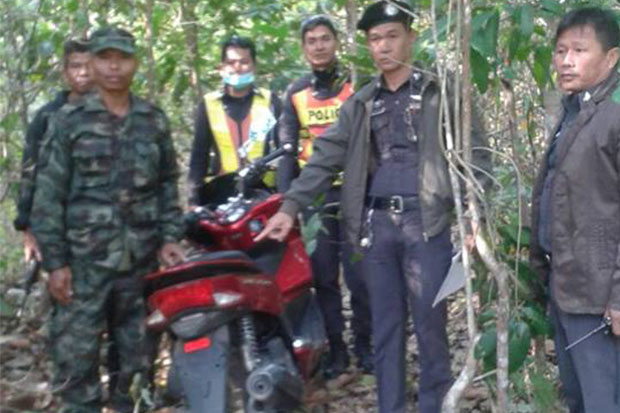 A motorcycle ridden by suspect Artur Segarra was found abandoned near the Thai-Cambodian border in Surin on Saturday. (Photo by Nopparat Kingkaew)