Angry abbot invites 'everybody' to use drugs at his temple

Two novices stand near the large banner put up by the angry abbot of Wat Thanon Suwanprasit in Surat Thani, sarcastically inviting everyone to take and sell illicit drugs inside the temple. (Photo by Supapong Chaolan)

SURAT THANI - The abbot of a local temple was so fed up with drug addicts using the grounds for their nefarious activities he put up a big cloth banner sarcastically inviting all local people to use or sell drugs there and to even offer them as alms to monks.

Photos of the banner spread quickly online and the sardonic cry for help brought a swift reaction from local authorities, who raided 13 nearby communities in Kanchanadit district around dawn on Tuesday.

More than 100 police, soldiers and local officials descended on Wat Thanon community in tambon Kadae and 12 nearby communities in a search for illicit drugs around 5.30am.

Pol Maj Gen Apichart Boonsriroj, commander of Surat Thani police, said the raid was mounted urgently after the  abbot of Wat Thanon Suwanprasit put up the sarcastic cloth banner in front of the temple.

Phra Khru Thammisarapon took the drastic action on Feb 4 after he found gear used for taking illicit drugs, and some bullets, in toilets at the temple. He also put up similar, smaller posters inside the temple grounds.

The abbot earlier complained that although the temple, which has 12 monks and novices, was not far from the district office the grounds were often used by addicts as a place to take illegal drugs. Installation of surveillance cameras and daily police patrols had failed to deter them, he said. 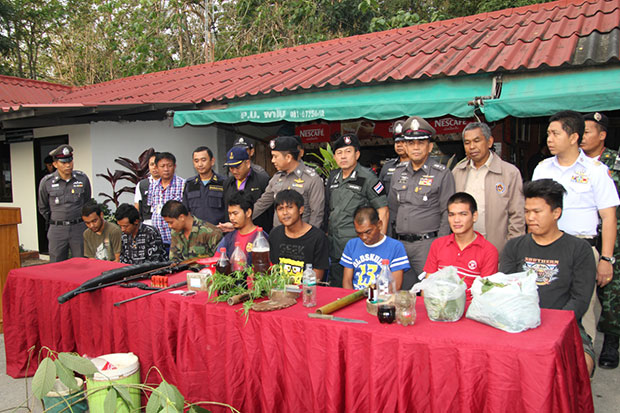 Eight of the 12 drug suspects rounded up during dawn raids on 13 communities near a temple in Kanchanadit district of Surat Thani on Tuesday, along with seized goods, are shown at a police media conference on Tuesday. (Photo by Supapong Chaolan)